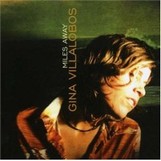 Gina Villalobos proves that a contemporary artist of the female persuasion doesn’t have to possess an “American Idol” voice to create powerful music. Remember Kim Carnes or Bonnie Tyler?

At times, Villalobos’ voice is reminiscent of both, but with a heaping helping of grit and backroads dirt. On other songs, her vocals drift into a softer, more wistful sonority closer to the singer/songwriter Wendy MaHarry. But comparisons aside, Villalobos churns out country-inflected roots rock that will have you reaching to turn up the volume.

The 10 original songs on Miles Away display a remarkable level of musical and emotional consistency. Although it isn’t a concept album, all songs share an acute awareness of pain and celebrate the strength required to live in the face of that pain. But this album isn’t gloomy; dark, yes, but not depressing. From the opening tune, this set demonstrates the rock and roll pedigree of rebellion and self-affirmation.

Co-produced by Villalobos and Erik Colvin, the sonics here are rock and roll rude. Guitars are up-front. This doesn’t qualify as easy listening music.

Some music is created to soothe the savage beast, but not Miles Away. It’s more about feeding the beast, then kicking it while it stuffs its face.


This article originally appeared in VG‘s Jun ’07 issue. All copyrights are by the author and Vintage Guitar magazine. Unauthorized replication or use is strictly prohibited.