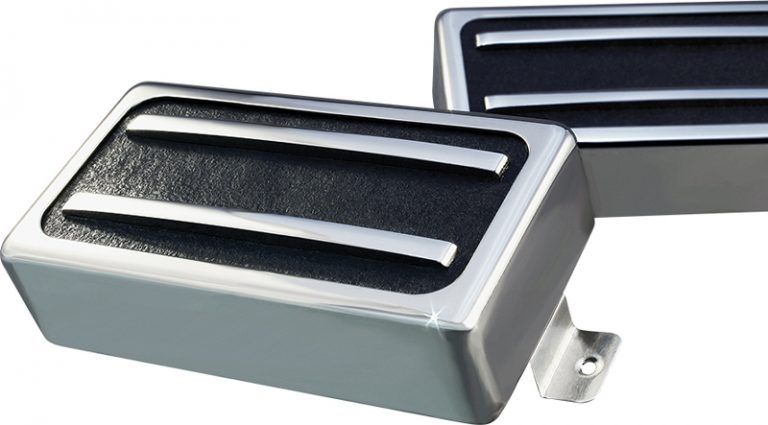 Jason Lollar has been in business winding pickups for more than 20 years. While he’s most famous for his take on the P-90, he makes pickups of all kinds, including 16 different humbuckers.

One of them, the dB Humbucker, is not your run-of-the-mill double-coil, but a high-output, double-bladed, black-and-chrome beauty that looks like something off a late-’50s Chevy.

The pickups were tested with a Hamer Artist HB (chambered upper bout, Korina wood) modified with the recommended 1M ohm pots. At full (guitar) volume through a 50-watt 6L6-based clean channel (tone stack set flat at 5), the signal was overdriven nicely, with the higher output of the pickups completely obvious and reacting aggressively. Chords were thick but not mushy, like having a good overdrive pedal up halfway. Rolling down the Volume to roughly 8, the signal cleaned up without sacrificing much volume. Even at this level, notes were sustained, clear, and woody. With just the clean channel and the Volume knob, the dBs provided great tone capable of covering many styles.

Switching to the lead channel (EL84s) was comparable to stomping on the gas of a well-tuned muscle car. Sustain was incredible and single notes blossomed. Fast runs were clear enough to distinguish picked and hammered-on notes. The overall sound was rich in harmonics with a slight dip in the upper midrange. The lows were tight without being farty, and bent notes retained full volume.

For those keeping track, these clock in at 11.2k Ohms for the neck and 12.77k Ohms for the bridge. They are a bit heavy (seven ounces) and loud! And, while louder isn’t always better, more energy at the beginning of the signal chain gives a player more control over the sound farther down the line.

High-output pickups may not be for everyone, but the Lollar dB is anything but a one-trick pony.