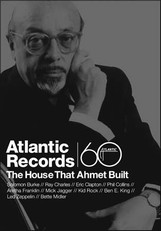 Considering the uncanny accuracy of Jamie Foxx’s Oscar-winning portrayal of Ray Charles in the movie Ray, it’s criminal that writer/director Taylor Hackford chose to depict Ahmet Ertegun, Jerry Wexler, and Tom Dowd (three principals of Atlantic, the company with which Charles achieved his initial success) not as the complex, talented individuals they were but as stereotypical Hollywood “white guys” – clueless, square, and opportunistic.

At the beginning of this retrospective of Ertegun’s life and the musical empire he built, he admits being pissed at that portrayal. “There was nobody – I don’t think – in the business who knew as much as I did about what was going on,” he says.

Ertegun’s knowledge of black American music, his taste and instincts (artistically and commercially) were matched only by his passion and enthusiasm. And, as amply illustrated here, he was also a great storyteller.

That the son of the Turkish ambassador to the United States and other countries, born into a life of privilege, also wrote hits for that incredible roster of talent – including “Mess Around” for Ray Charles, “Don’t Play That Song” for Ben E. King, and “Let The Boogie Woogie Roll” for Clyde McPhatter (later covered by Robert Plant) – is just another element of the duality that was Ertegun’s fascinating life.

Ertegun and his associates were by no means angels. Though there is some finger-pointing (at deejay Alan Freed) regarding the payola scandal of the late ’50s, Atlantic was guilty of the equally common practice of not paying artists the royalties they were due. So it’s a bit self-serving to note that Atlantic “refigured its royalty structure” and helped form the Rhythm & Blues Foundation, finally, in 1988, only after artists like Ruth Brown (the label’s first chart-topper, by then working as a domestic,) spoke out about the injustice.

But to cite one of many artistic coups, Ertegun, who died in 2006 at age 83, had the foresight to team Eric Clapton with Aretha Franklin, on 1968’s Lady Soul (that’s Slowhand soloing on “Good To Me As I Am To You”). And as Ray Charles sums up in one of the charming interview segments, “You guys allowed me to be myself.”

The two-hour DVD features conversations with Clapton, Wexler, Mick Jagger, and others, and performance clips of everyone from Cab Calloway to Zeppelin to Kid Rock. For another inside glimpse of Atlantic’s inner workings, the documentary Tom Dowd And The Language Of Music, about the label’s resident genius behind the control board, is also recommended. – DF


This article originally appeared in VG‘s Sep ’07 issue. All copyrights are by the author and Vintage Guitar magazine. Unauthorized replication or use is strictly prohibited.

Chuck Berry – You Never Can Tell