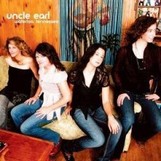 Old-timey music isn’t a particularly attractive or commercially viable musical genre. Uncle Earl may change that. This foursome of twenty-something women may not be quite as foxy looking as The Coors, but they still manage to effectively de-whisker old time music.

Old Time music is tricky to play. If done too slickly it looses what makes it old timey, yet if you are too gritty or funky you risk losing most modern listeners. Uncle Earl manages to plot a tightly jibbed course between the rocks and the deep blue sea. Their euphonious vocals keep the sound smooth, but their instrumental arrangements have just enough folksy dirt to make things interesting. “The Last Goodbye” opens with finger picked guitar and Abigail Washburn’s simple lead vocals, but after only half a verse KC Groves and Kristin Andreassen join her to form perfect three-part harmonies. At times Uncle Earl’s vocals remind me of the Canadian trio, The Wailin’ Jennys, with their perfectly pitched harmonies. But Uncle Earl’s instrumental parts are more driving, due in equal parts to Abigail Washburn’s banjo and Rayna Gilbert’s fiddle.

The production values on Waterloo, Tennessee add greatly to the album’s commercial viability. John Paul Jones knows how to make a good sounding album. Even the rougher sounding instruments have a particularly euphonic tonality so they aren’t as harsh as if they were recorded “straight.” The album’s overall sonic character reminds me of Alison Krauss’s best production efforts. The producer’s primary intent is to make the music more accessible to listeners used to smooth-sounding commercial releases. On Waterloo, Tennessee John Paul Jones and Uncle Earl have accomplished the near impossible – making old timey music sound slick. And that’s not a bad thing.


This article originally appeared in VG‘s Jul ’07 issue. All copyrights are by the author and Vintage Guitar magazine. Unauthorized replication or use is strictly prohibited.