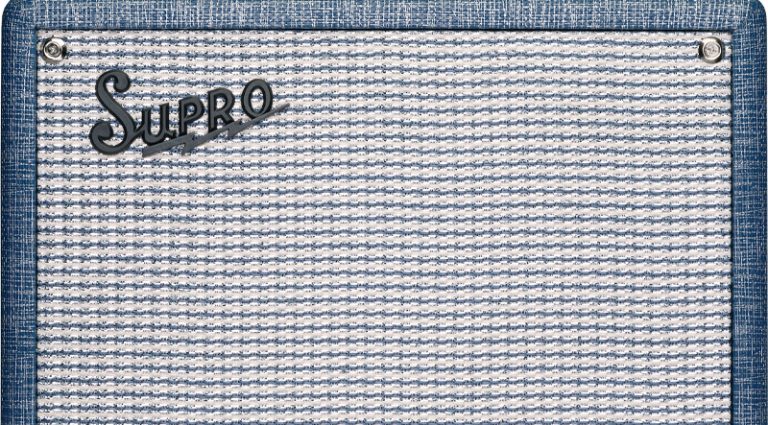 In guitardom, players far too often believe there is nothing more sonically pleasing than a tall stack. Yet, plenty of diminutive amps offer up massive tone; think Derek and the Dominos’ Layla and Other Assorted Love Songs.

Supro is wise to this. After recently launching a lineup of full-sized Classic and 1964 Reissue amps dubbed Neptune, Coronado, Supreme, Statesman, etc., its designers turned to building a little amp that could. Now Supro’s vintage Super of the ’60s is back, better than ever.

The new Super was reverse-engineered using a vintage favorite from the collection of Aerosmith’s Joe Perry. The results are the Super and its buffed-up sibling, the Reverb, with tube-driven spring reverb. Both are five-watt/1×8 Class A combos. They’re small, they’re light, and they sound big.

The advantage of a small, low-powered amp is that you can crank it. Turn the Volume knob north and the amp is overdriven into a state of magical distortion while you can still hear yourself think. And you won’t have your neighbors calling the sound police.

The Super sports just one Volume knob, and it’s all you need. The absence of EQ controls is purposeful – the more pots and switches are in a circuit, the more that electrical signal (and thus, an amp’s tone) from the preamp is colored, altering he circuit’s essence. Instead, the Super gives no-frills, high-gain, raw tone from a 6V6-equipped, single-ended power amp.

The Reverb needs a couple more knobs, naturally, including Gain, Treble, Bass, and a Master volume (which is a welcome rarity in such a small package). Its preamp circuit includes two 12AX7s and a single 12AT7. Plus, there’s a Bypass plug-in to skirt the spring-reverb circuit when in search of bare-bones tones.

Both amps sing through custom-made speakers designed by Eminence and Supro with help from Iowa State University, which laser-scanned Perry’s vintage Jensen.

So, how do they sound? In honor of Derek, both the Super and Reverb were tested with a ’56 Strat, and both were hot to trot. Cool blues riffs, chunky rock shuffles, wailing solos – they’ve got the grit. Plus, they’re plenty loud for the studio, small gigs, or to scare your cat from the living room.

The Reverb has another set of tricks up its sleeve; the back panel sports a trio of tube-driven direct outputs – Wet (reverb output), Dry (preamp output), and Mix (wet and dry output with attenuator) – that allow the user to turn it into an outboard reverb unit or drive other amps in concert with the Reverb.

Copping the sounds of a Supro Reverb unit from the ’60s is possible using the dry output, which removes the dry signal from the output, leaving 100 percent-wet spring reverb from the 8″ speaker while sending as much preamp gain as desired on to another amp. Use the Mix output for direct recording or even configuring the unit to work as a “plug-in” insert if/when you use ProTools.

They may not have the headroom, articulation, or sophisticated overtones of big amps with big speakers, but that’s what those amps are for. And at just 23 pounds, these new Supros are eminently portable. And if you still have doubts, peek at the pic in the Rolling Stones’ Blue & Lonesome album – a vintage Super all miked up and ready for action.