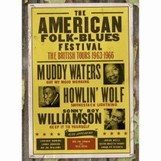 This is the British TV counterpart to the German broadcasts that were unearthed on three stunning volumes of The American Folk Blues Festival, in 2003. If you saw those, you’ve probably already stopped reading and are halfway to the DVD store.

The presentation is more straightforward here – onstage performances, as opposed to the uncannily authentic sets designed for German television by Gunther Kieser – but, since the lineup is largely the same, the result is just as potent.

It’s hard to imagine so many blues giants in the same place at the same time, even with the booklet’s black-and-white center-spread proving it. The group photo of Howlin’ Wolf, Willie Dixon, Sonny Boy Williams, Lightnin’ Hopkins, and others could only be an artist’s fantasy montage, right?

Wrong. As you immediately discover popping in the DVD, Sonny Boy was followed by Muddy Waters, who then turned over the microphone to Lonnie Johnson, who preceded Big Joe Williams! The irony is that back in Chicago these legends were in fact playing within blocks of each other on any given night. But it took the European tours, and in particular the English rockers that they spawned, to give them worldwide exposure.

Though he performs solo acoustic, the aforementioned Johnson is easily the most sophisticated guitarist on the bill – his single-note lines are reminiscent of his Blue Guitars duets with Eddie Lang. He is followed by the tour’s most primitive act, Big Joe Williams, playing “Baby, Please Don’t Go” on his “customized” 9-string guitar.

The hottest act is probably Howlin’ Wolf – singing a variation of “Killing Floor” with Hubert Sumlin soloing on his plastic Italian electric – although Lightnin’ Hopkins and Big Joe Turner give him a run for his money. The former plays each stanza of a 12-bar boogie as his mood strikes him – some stretched to 13 or 14 bars, one lasting about 20 – while Turner’s jump style features a fleet-fingered solo by none other than Otis Rush!

See what I mean? You half expect to hear an emcee say, “Abe Lincoln, ladies and gentleman. And now let’s bring to the stage… George Washington!”


This article originally appeared in VG‘s Aug. ’07 issue. All copyrights are by the author and Vintage Guitar magazine. Unauthorized replication or use is strictly prohibited.