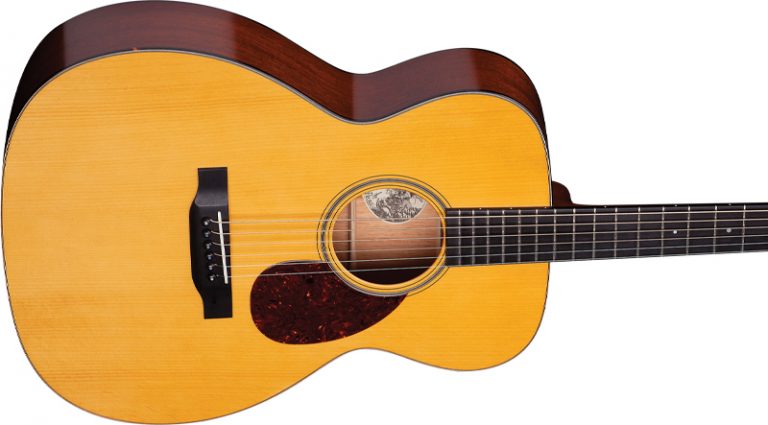 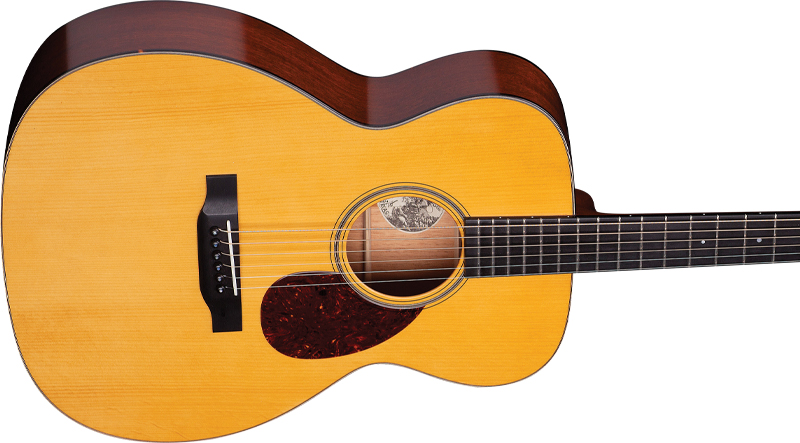 This medium-sized acoustic is based on Lage’s beloved 1939 Martin 000-18, which he’s used for years, and the Collings T (or traditional) series. The aim is to bring that interwar acoustic mojo into the twenty-first century.

The OM1 JL has Honduran mahogany neck, back, and sides with an Adirondack spruce top (Sitka is also available), and animal-protein glue construction. The unbound fingerboard is ebony with small, tasteful gold mother-of-pearl dots and eighteen medium frets. As you might expect on a guitar evoking the past, the tuners are open-gear Waverly units with vintage oval buttons (16:1 ratio) and a nicely relic’d nickel finish. Other accoutrements include ebony bridge pins with gold dots, a bone saddle, and a tapered square headstock with inlaid Collings logo. There are also a classic tortoiseshell pickguard and wood rosette. Nothing about the ornamentation of the guitar is particularly over-the-top – it’s all utilitarian and refreshingly restrained.

The devil is in the details with the Julian Lage box. The finish is crucial, for example – a very thin nitrocellulose lacquer on the body and neck enables the sound of the tonewood to emerge. Inside, a vintage-style X brace with no tongue brace across the underside of the top bout again speaks to flattop design of the 1930s.

The neck is equally interesting. It has a hand-rubbed nitro finish and is attached with a mortise-and-tenon joint. Like a well-played old guitar, the OM1 JL has a compound radius on the fingerboard, going from 14″ to 26″ and suggesting years of being played in.

First thing you’ll notice upon picking up the OM1 JL is the wonderfully light weight – the tester came in around three pounds 10 ounces, a nice break from heavy dreadnoughts and jumbos. The guitar’s neck, with its 25.5″ scale, is superbly comfortable and again feels like it’s been played for decades, something that Collings excels at. In fact, it’s one of those necks you feel you can play forever and not get any hand weariness. It has a very natural, broken-in feel with just about perfect setup and action.

The crowning achievement, however, is the tone, and it’s a showstopper. The OM1 JL achieves that rare combination of materials and finish that yields a warm, sweet tone perfectly balanced on every string. Many acoustics off the rack have that same thin, treble-edged tone coming from the upper strings, but this guitar is all about a lilting midrange – and more bass than you’d expect from a medium-sized body. As with tubes in a vintage amp and aged tonewood in an old Les Paul or Strat, the sound of a sweet midrange is a holy grail for tone enthusiasts and the Collings Julian Lage has it in abundance. It’s difficult not to be impressed by such dulcet tones.

Granted, the Julian Lage Signature isn’t within everyone’s price range, but the OM1 JL illustrates the truism that ornament doesn’t equal tone. This Collings is a simple and traditional-looking acoustic, without much of the fancy décor and inlays that mark other premium guitars. But if you want a top-end instrument that delivers gorgeous tone and superior playability, this one is hard to beat. It’s a once-in-a-lifetime guitar.