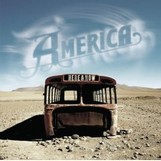 The folk-pop songs of America have, for many, long been one of life’s guilty pleasures. And for every “Horse With No Name” there was a brilliant song like “Only In Your Heart,” “Tin Man,” “Daisy Jane,” “Old Man Took,” “Three Roses,” and dozens more.

This release is a batch of wonderful new songs assembled with help from longtime fans. Produced by Adam Schlesinger (from Fountains of Wayne) and James Iha (Smashing Pumpkins), with contributors including Ryan Adams, Ben Kweller, and members of My Morning Jacket, the sound here is pop perfection.

“Chasing the Rainbow” is one of those Gerry Beckley gifts from harmony heaven. “Indian Summer,” though written by Mark Rosso, is quintessential Dewey Bunnell. Few people in pop have a voice so distinctive. “Ride On” is another haunting Bunnell tune, with great guitar from Adams. Beckley fans will love that his voice is all over the record, as well, on songs like “One Chance” and “Look at Me Now.” Throughout the record, the guitars are beautifully layered and assembled like a pop puzzle. Beckley, Iha, and Bunnell are all in the right spot, driving each song.

A bonus concert disc recorded for XM Radio delivers the hits, performed with the expected skill and grace.


This article originally appeared in VG‘s Jun. ’07 issue. All copyrights are by the author and Vintage Guitar magazine. Unauthorized replication or use is strictly prohibited.
Current Issue