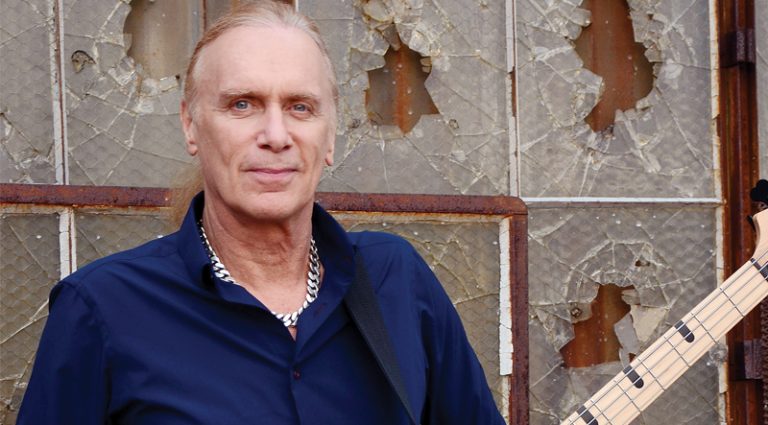 Though there’s no denying Billy Sheehan’s exceptional technical talents on the bass, he has always kept sight on the importance of the song – as evidenced by his work with David Lee Roth, Mr. Big, and the Winery Dogs. He recently returned to the fold with Mr. Big, the rock band that also features Paul Gilbert, to record Defying Gravity.

Which basses, effects, and amps did you use on Defying Gravity?

Pretty much the same I use live – a Yamaha prototype bass that I’ve beat it up pretty badly touring the last few years on hot, sweaty nights. So this was probably the last album I’ll use it on. I’m replacing it with a production model, which is way better than the prototype! The prototype was made by hand, but the production models are perfect. That through my Hartke LH1000 amps. My pedalboard has an EBS [Billy Sheehan Signature Drive], which has great harmonic content, super-smooth distortion that can dial in as much or as little as you want without effecting the normal tone.

From a bass-playing perspective, do you have some favorite new songs?

There’s one called “Be Kind,” which is the last song on the album. It’s a beautiful, bluesy piece, and we played it straight. Nothing fancy, but just lock with the drums and do your thing. There’s one called “Mean to Me” which required me to adjust some technique because it was a blazing, typical right-handed thing. I ended up using the four-finger technique. People always ask me about my three fingers, and I went to four for this because it’s a grouping of notes to pluck that I could have done with three, but to really make it sound right, I had to do with four. That was a real challenge; I had to strap myself in and hit it hard. And there are a couple of ballads that are really nice. One is called “Damn I’m in Love Again,” which is basically straight-up-clean bass, playing the root fifth octave and a very simple super-deep low. It’s a beautiful, simple thing. I get accused of, “All he ever does is solo all the time.” No. That’s not true. The most successful song I ever played on was “To Be With You,” and there’s no bass solo on that.

Was the David Lee Roth Eat ‘Em and Smile album and tour a high point of your career?

In a way, yes. But I actually had more personal success with Mr. Big. But I came from almost zero to something with Dave. If it wasn’t for Dave calling and bringing me out to L.A. to start a band, we may not be talking together right now. It was such a pivotal moment in my life and a huge change of every aspect in my life – leaving Buffalo, starting a band was a whole new world, a whole new life. So yeah, I guess it probably is one of the most important things that ever happened. However, with Mr. Big we had a #1 single, and that was my band, so it was a bit more satisfying in that respect. But I still never doubt that none of that could have happened if I wouldn’t have been involved with Dave and the Eat ’Em and Smile record.

Was there any professionally filmed footage of an Eat ’Em and Smile show?

I have – on a hard drive – a full, professionally shot version of the Eat ‘Em and Smile show; I believe it may have been shot in Baltimore. But it doesn’t belong to me, so I can’t distribute it. In the end, Dave or Warner Brothers would own it. Hopefully someday, Dave will say, “Let’s play again, and let’s take out all the archives, and let the public have them.”

Is your old Fender Precision Bass, “The Wife,” retired?

It’s packed away, but I take it out every once in a while. Recently, I was working on a project and I had all these old spare parts leftover from the days putting that bass together – Gibson pickups and bridges and all kinds of stuff. So I went out and bought bodies and necks from Warmoth – who blew me away with the quality of work they do – and I used them to make two versions of the original Wife, just because I didn’t want to get rid of the old parts, and wanted to use them on something. So I’ll do a little photo essay of my adventure of making those basses soon and post it online.

Buck Owens and The Buckaroos