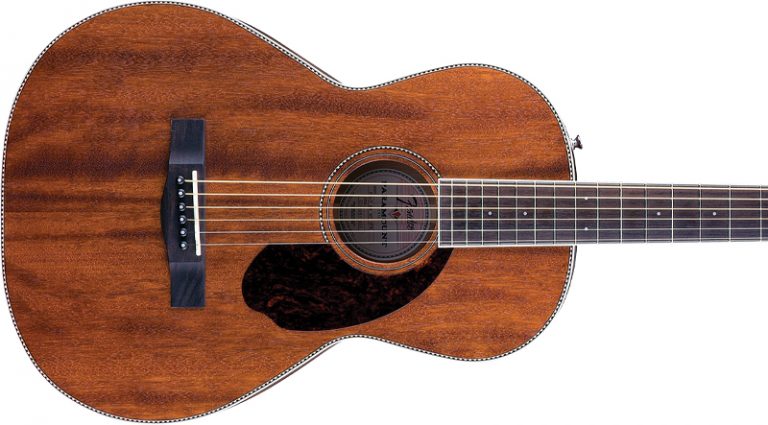 Once wildly popular among everyone from drawing-room dilettantes to road-hardened bluesmen shuffling the dusty byways, parlor-sized guitars fell out of favor mid-century when popular ensembles demanded the volume better provided by big-bodied dreadnoughts.

The last several years, however, have seen a rebirth of the parlor segment – everything from well-built econo boxes that appear ripped from the pages of old Monkey Ward catalogs to luthier-crafted customs. While the Fender PM-2 Parlor’s price falls closer to the econo side, its materials and build might leave some silently wondering if the bean-counters in Corona forgot a digit.

Out of its included hardshell case, the all-mahogany PM-2’s most noticeable features are its satiny open-pore solid top and sides. The finish is billed as Natural, but owing to the mahogany, it’s a dark hue wonderfully accented by checkered purfling and rosette, and abundant aged white binding from body to headstock, the latter of which is tastefully tarted up with a mother-of-pearl “Fender” logo and decorative inlay and open-gear tuners.

The PM-2’s playability lives up to all those good looks. The comfortable C-shape neck (also mahogany) boasts rolled edges, and its rosewood fingerboard is kitted with Fender’s skinny “vintage-style” frets.

The PM-2 arrived with a light, buzz-free action all the way down its 24.75″ scale, from the bone nut to the neck’s junction with the box at the 12th fret. It also gave lie to the old saw that parlors are diminutive of voice; no doubt that light finish helps.

Characteristic of many parlors, the PM-2 is midrange-forward, but fingerpickers and front-porch strummers alike will easily drive the top end and get plenty of volume out of those tasty low-string runs and hammer-ons. In all, an incredible value.