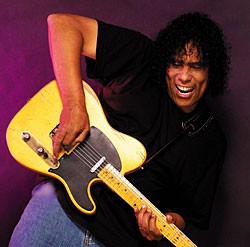 A little more than a decade ago, guitarist/vocalist Jon Butcher described his affiliation with the then-new quartet Barefoot Servants as, “The best thing I ever did.” The band, featuring co-guitarist Ben Schultz, bassist Leland Sklar, and drummer Ray Brinker, released one album and toured before its members went their separate ways.

Butcher developed his Electric Factory studio, and among his more recent projects has been writing and playing music for the Showtime channel special, “Hendrix: The Jimi Hendrix Story.” He has also toured his old haunts in New England. And then there was the unexpected reunion of Barefoot Servants…

“Ben called me one day, out of the blue,” Butcher recalled. “He had been doing some work with a historical society, restoring old films, and Lee had been touring; he’s the perpetual road dog – if not with Phil Collins, then with somebody else. It had been years, and Ben asked me to come by his place. We started making music, and things fell together. That’s what musicians do.”

Looking back at the short-lived first effort by the band, Butcher opined, “When young bands start, there’s really not much else to get in the way. And I have a theory about why bands break up; life intervenes. People get married, get families. Each of us has a pretty substantial mortgage that needs attention! The first Servants album was great, by all standards, including ours – and we had a great time touring. Then I got a call to do something, Lee got a tour, Ben got a call to do something… and blink, 10 years go by. The Hendrix film was a big time in my life; I wasn’t onscreen, but all of the guitar playing, and a lot of the singing, was me. Ben was responsible for hooking us up again, and I’m glad he did.

“Since so much time had elapsed, getting reacquainted was kind of unique,” The first CD was centered in a blues-rock vein, and this one is much more introspective and biographical; the experiences of 10 years found their way into the writing. I did all the lyrics, and I had a lot on my mind, and a lot to get out. There was never any point where I was scratching my head, saying, ‘Jeez, I wonder what I have to say…'”

The guitarist noted that electronic musical correspondence via the internet figured “heavily” into the recording of the new album, as he and Schultz have their own separate recording studios, but the bulk of on-site recording was done at Schultz’s studio. This time around, Neal Wilkinson is onboard as the band’s drummer. 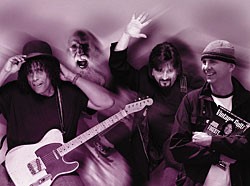 The overall sound of Barefoot Servants 2 might be described as tight, uncluttered, with songwriting that touches on more than one contemporary issue. Acoustic guitars figure prominently into the mix, and there isn’t even a lead guitar break until the fourth song.

“That was a real wrestling match,” Butcher detailed. “There were ideas and concepts to be expressed, and not just riffage. We started noticing things that weren’t needed – ‘Where’s the wah-wah?’ The criteria was not who did which solo or who stepped on a fuzz box. The songs were the dominant thing, and several of them were written on acoustic guitar, as you can tell, but there was never a time when we said ‘Yeah, we’ll make an acoustic record!'”

Twelve-string acoustic blend with electric guitars on songs like “I Don’t Care At All” and “The Bells of St. Mary’s.”

“I have a Taylor Leo Kottke that I used all over the record,” Butcher noted. “And Ben and I went guitar shopping one day, and found a great mid-’60s Rickenbacker 360/12; it’s a winner. It was used heavily in ‘When the Day Comes’, where I do a sort of George Harrison Rubber Soul backward guitar.”

“I’ve been working with Taylor for a long time,” said Butcher. “I think they make the best production guitars available… and I’d emphasize production. There are custom makers that are great.”

There’s also a dose of resonator. “When we completed Barefoot Servants 1, Ben threw himself into dobro, and he’s now got a collection. He used a Scheerhorn square-neck, a Beard square-neck, and a Dobro DB-60.”

Butcher used custom solidbody instruments made by Washington-based luthier Bill Nash that, he says, “…pay homage to the Telecaster and Stratocaster. I’ve been using his stuff for about the last 10 years. I used the Tele-type guitar on almost everything on the record.” The guitar, seen in Butcher’s hands in some of the photos in the liner booklet of Barefoot Servants 2, shows some wear, and the guitarist said that it wasn’t given a relic treatment.

“It looks like that because I’ve played the **** out of it,” he said with a laugh. “You’ve got to understand that for me, guitars are still tools. I don’t have my guitars in glass cases. If they’ve got beauty marks, scratches, gouges, or places where my sweaty arm has worn off the paint, so much the better.”

The aforementioned lyrics often let a listener draw their own conclusions, Butcher emphasized, and he wouldn’t have it any other way.

“We would hope that some of the people who dig the stuff we write will be able to rub a thought or two together,” the guitarist concluded.

Barefoot Servants 2 is a well-produced effort by veteran professional musicians, and if its contents come across as meaningful, as well, Jon Butcher will be all the more pleased and gratified.

For more on the Barefoot Servants, go to www.barefootservants.net.


This article originally appeared in VG‘s April ’06 issue. All copyrights are by the author and Vintage Guitar magazine. Unauthorized replication or use is strictly prohibited.