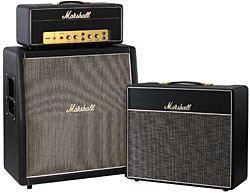 In the world of guitar amplifiers, the word “Marshall” often conjures images of 100-watt stacks capable of producing ear-bleeding levels of tube-powered volume – the kind favored by guitarists who play stadiums.

And while it’s true Marshall amps built their reputation by sharing the stage with the likes of Jimmy Page, Pete Townsend, Jimi Hendrix, and Eddie Van Halen, they certainly weren’t all born to serve that purpose. Along with their fire-breathing 100-watt stacks, some of the first amps designed and built by a drummer named Jim Marshall and an electronics engineer named Ken Bran were smaller, low-powered units. Their very first platform was a head created in 1962 called the JTM45, which by the mid ’60s had served as the basis for the combo models 1961 (4×10″) and 1962 (2×12″), which became popular not only because they put a decidedly distorted twist on guitar tone, but also because in ’65 Eric Clapton used a second-series 1962 to record John Mayall’s Bluesbreakers with Eric Clapton album. That disc is widely regarded as the first recording of certifiable “Marshall tone” and became the reason the 1962 model is now typically called the “Bluesbreaker” amp.

Looking for a way to let players re-create the sound of Clapton’s amp in a more user-friendly way (as in, with less volume), Marshall wasted no time in debuting a version with a smaller output transformer and the more readily available EL84 output tubes (rather than the Bluesbreaker amp’s KT66 tubes). Their 18 watts of output gave them the near-perfect combination of power and usable distortion.

Fast forward to the mid/late 1990s and the growing “boutique” amp movement. In its midst is a group of niche builders who hold an appreciation for these low-watt Marshalls, and begin building amps for discriminating players the world over. Fast forward again, to mid 2004, when Marshall, looking to get back into the game it invented, introduced two “reissue” amps – the model 1974X and 2061X – to launch its new Hand Wired series.

The 1974X is a 1×12″ 18-watt combo, while the 2061X is a 20-watt head that plugs into a 2×12″ cab. Both are, as the series name implies, assembled by hand, with wiring and soldering that is perhaps the cleanest we’ve ever seen – absolutely immaculate. Even if you don’t believe that point-to-point circuits sound better than printed-circuitboard (PCB) circuits, looking inside the Marshalls would make it hard to argue their advantage in terms of durability.

The 1974X uses three ECC83 tubes in the preamp, two EL84s in the power section, and one EZ81 for the rectifier. It has one Normal and one Tremolo channel, each with one Volume and one Tone control, as well as controls for Speed and Intensity on the Tremolo channel. Each channel has two sets of inputs, and the top-mounted plexiglass faceplate hosts a standby and on/off switch, along with an indicator. The back edge the chassis hosts dual parallel speaker output jacks, impedance selector, footswitch jack, a fuse holder, and detachable power cord. The specially aged Celestion G12M Greenback T1221 is exclusive to Marshall. The tremolo on/off footswitch – a diecast copy of the original – is included.

The 2061X Lead and Bass 20 uses the same preamp and power tubes, but has a solidstate rectifier. Its two channels each have a Tone and a Volume control, and each has high and low inputs. The 2061X has a single on/off switch with indicator light, and the rear of the chassis has parallel speaker jacks, an impedance selector, fuse holder, and a detachable power cord. The 2061CX extension cab is loaded with two Celestion G12 30H reissues.

We tested the Hand Wireds using our humbucker-equipped Ibanez Artist and stock ’70s Fender Strat. Starting with the Ibanez plugged into the 1974X’s Normal channel, we turned the volume to 4 and were greeted with a smooth blues breakup; thick, with solid low-end response and exceptional bass-to-treble balance. High-end response was also extremely smooth, with no harshness whatsoever. Rolling the tone control back fattened up the overall response, and did not kill the amp’s sparkle. Cranking the volume, we got more gain, and the tone stayed smooth even as we moved the Volume to full. The tone never showed signs of getting mushy or running out of headroom, and the sound pressure level (a.k.a. volume) was always quite bearable. Certainly, the 1974X is too much amp for most home jamming /bedroom practice applications, but it could well be the ultimate recording or club-sized rock amp. And its tones are authentic and immediately reminiscent of why the originals are in such demand.

The 1974X’s Tremolo channel has a slightly different tone, and its Tone control works somewhat differently. The tremolo effect is very smooth and even, and you must have the footswitch engaged to turn off. With our Strat, we immediately got a very fat Strat tone with a sparkly, robust edge, especially with the neck and middle pickups.

The 2061X produced more sparkly highs, with plenty of low-end. It does not produce the same amount of gain as the 1974X, which would lend it more to blues than rock playing. We found it to be slightly more touch-sensitive – another plus for blues – and it is slightly louder, with more low-end, due primarily to the close-backed cabinet. The Tremolo channel is likewise cleaner and bassier than the Normal channel.

Both amps sound very authentic, with signature British with tone that will make any die-hard old-school “Marshallhead” grin from ear to ear. Their craftsmanship is first-rate, and while they don’t come cheap, this is another certifiable case of “you get what you pay for.” Here, what you may be paying for is that ultimate rock and blues tone with point-to-point attention to detail.