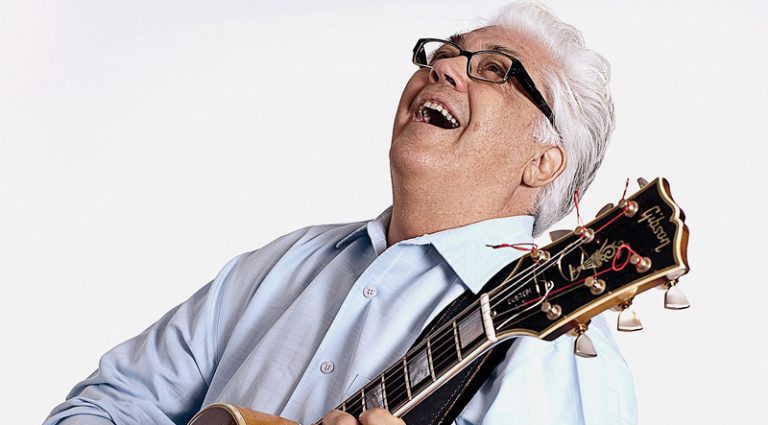 Guitarist Larry Coryell died February 19 in New York City after performing the previous night at the Iridium. He was 73 and passed away in his sleep, from heart failure.

A pioneer of jazz-rock, Coryell was noted for being comfortable in almost every style. Dubbed “the Godfather of Fusion” after introducing a new feel to electric jazz in the 1960s, he was comfortable playing anything from distortion-laden electric work to intricate lines on acoustic, often with a cutting tone and note bending that owed much to blues, rock, and country.

Born Lorenz Albert Van DeLinder III on April 2, 1943, in Galveston, Texas, Coryell grew up in Seattle, where his mother introduced him to the piano as a child. By his teens, he’d switched to guitar and was playing rock music. At the University of Washington, he studied journalism while taking private guitar lessons. By 1965, he was living in New York City and taking lessons in classical guitar. He soon began playing in Chico Hamilton’s quintet and other groups. While citing Chet Atkins and Chuck Berry as early influences, he also took cues from John Coltrane, Barney Kessel, and Wes Montgomery and was inspired by The Beatles, Byrds, and Bob Dylan. In ’66, he formed The Free Spirits, where he sang and played sitar while also serving as the group’s primary composer. Though essentially a melody-oriented/radio-friendly psychedelic band, it foreshadowed jazz/rock fusion with soloing by Coryell and sax/flute player Jim Pepper.

“When you heard Larry, you felt pure passion about the guitar and music and improvisation.”
– Sheryl Bailey

In ’67, he began playing in a quartet formed by vibraphonist Gary Burton and featuring Roy Haynes on drums and Steve Swallow on bass. Their album, Duster, proved one of Coryell’s proudest moments in part because he fully aware that he was working with heavyweights. Further gigs at the time included Jack Bruce and others as Coryell established his musical voice via two solo albums – Lady Coryell and Coryell – that mixed jazz, classical, and rock.

In ’68, he formed his own band and began collaborating with a variety of players including flutist Herbie Mann (on Memphis Underground) Miles Davis, Burton, Alphonse Mouzon, Ron Carter, Chet Baker, and others. In late ’69, he recorded Spaces with John McLaughlin, an album cited by many as embryonic in the fusion-jazz movement.

Coryell formed the Eleventh House in ’72. A fusion band that emphasized complex compositions, flashy solos, and volume, it lasted only a few years but was seen as a preeminent force in the genre. After it disbanded, Coryell focused on acoustic guitar for several years, then by the 1980s was again playing electric, in a straight jazz context.

Coryell’s final album, Barefoot Man: Sanpaku, was released in October of 2016, and on it he used just two guitars – his Gibson Super 400 and a Martin acoustic.

“I felt they were all I was going to need,” he told VG’s Willie Moseley at the time. “I chose the Super 400 for the playing ease, and the Martin is a custom prototype Larry Coryell model. It’s harder to play [because of its] wound third string… but what a sound!”

Coryell had planned a summer tour with a reformed Eleventh House, which has a new album set for release June 2.

Being a consummate pro and highly respected amongst his peers, there was a predictable outpouring in the days and weeks after Coryell’s passing.

“Larry burst on to the scene when I was still in high school and trying to figure out what went where on the guitar,” said Grant Geissman, a first-call L.A. session guitarist. “He had it together – straddling genres, playing fiery, interesting solos, and always playing at the top of his game. I can’t believe he’s gone, but he will forever remain an inspiration.”

“I first heard of Larry in the mid ’60s, during the explosion of what was then called ‘jazz rock,’” added Mike Anthony. “Larry had an avant-garde voice in the genre. I wasn’t that into it, but I considered it my duty to be open-minded and versatile. I did enjoy Larry’s fluency and commitment to the style, and got to see him on Sunset Boulevard in Hollywood.

“What is most notable to me was the evolution of Larry’s playing to modern bop,” Anthony added. “I was listening to the jazz station one day and heard a guitar solo I admired, thinking, ‘That Chick Corea concept is the way I like to play.’ Then the announcer said it was Larry Coryell.”

VG contributor Jim Carlton was a longtime friend of Coryell; the two were trying to coordinate slots for Carlton on Coryell’s tour this spring.

“Larry and I first connected because of our mutual friendship with Gibson product designer and clinician Andy Nelson, someone Larry admired tremendously,” said Carlton. “He even used one of Andy’s guitar exercises on his first instructional record. Larry took friendships seriously and worked at maintaining them. I received dozens of calls from him, regardless of where he was in the world. He lived in Orlando because of its climate and international airport, but considered himself a world citizen. Europe appreciated modern jazz and Larry’s innovative brilliance, so he spent a great deal of time there.

“On one June afternoon in 2007, Larry was doing a book signing near Roger McGuinn’s house and I implored Roger to attend,” Carlton added. “I said, ‘One of the world’s greatest guitarists will be appearing five minutes from your house.’ When Larry noticed him in the audience, he turned to the back of his book, Improvising: My Life in Music, and read about Roger’s composition ‘Eight Miles High’ and how it influenced him. Roger was surprised and stunned. They bonded even further six months later, in Germany, when they found themselves as serendipitous seat mates on a train.

“Roger recently told me, ‘It made me feel good that people from the real jazz community appreciated my tribute to John Coltrane, and that ‘Eight Miles High’ was an inspiration to Larry.”

“I was so saddened,” said Harvie Swartz, Coryell’s preferred bassist for sessions and gigs in New York City. “I became acquainted with his playing while a freshman at Berklee from an album with Chico Hamilton, The Dealer. He really was the first jazz guitarist to play with a rock sound; he bridged the gap with rock and jazz and helped start a new concept of music – the tradition being carried on by Mike Stern, John Scofield, John Abercrombie, etc.

“Later in my career, I got to work with him in duo, trio, and quartet,” Swartz added. “It was always an amazing experience and he was such a focused, serious musician. I hope that the public will look at his incredible discography and all the great music he produced over his distinguished career.”

“When you heard Larry, you felt pure passion about the guitar and music and improvisation,” added Sheryl Bailey, the innovative jazz guitarist. “As a teen, I was curious about this mysterious ‘jazz guitar’ music after having been a metal shredder. I’d heard Sonny Rollins and Bird, and was so mesmerized, but intimidated by this enchanting music. The LP Twin House changed my life. It had two acoustics, played by Larry with Phillip Catherine, and I’m still touched by it. Larry was the perfect crossover of jazz and rock – down-and-dirty blues with harmonic sophistication and bebop technique. At the time, it was the inspiration I sought as a guitarist playing music innovated by saxophonists.

“A few years later, I was able to see Larry and Emily Remler play in Pittsburgh, and on many other occasions when he visited my hometown,” Bailey added. “I was introduced to the Joe Zawinal classic ‘Mercy Mercy Mercy’ from a soulful, rocking version in which Larry played chorus after chorus. Those were my early influences as a guitarist and improvisor; I then knew that was the path I wanted to follow. Because what was cooler and more alive and joyous than that?”

“Larry was always moving forward as a musician and composer. He gave 100 percent at every gig and it was such an honor to play with him.”
– Vic Juris

“Larry was on a very short list of jazz guitarists who are the best of the best – he always played tasty stuff with such great notes and altered scale mode selections,” said Jay Graydon, studio guitarist and producer known for playing the solo on Steely Dan’s “Peg” and co-writing “Turn Your Love Around” for George Benson, “After the Love is Gone” for Earth, Wind and Fire, and producing and playing on Al Jarreau’s “We’re in this Love Together.”

“I was a senior in high school and attended a concert by Larry’s group, Foreplay, at Fairleigh Dickinson University in 1971,” said Vic Juris, an in-demand jazz guitarist who was close to Coryell personally and professionally. “It was a life-changing event for me, and to this day I’ve never heard any musician kill like Larry did that night. Changed my life forever. Little did I know that in another 10 years we’d tour as a duet; here I was, a neighborhood kid from a blue-collar town in New Jersey, getting such an opportunity.

“Larry was always moving forward as a musician and composer,” Juris added. “He gave 100 percent at every gig and it was such an honor to play with him. I will miss my dear friend.”