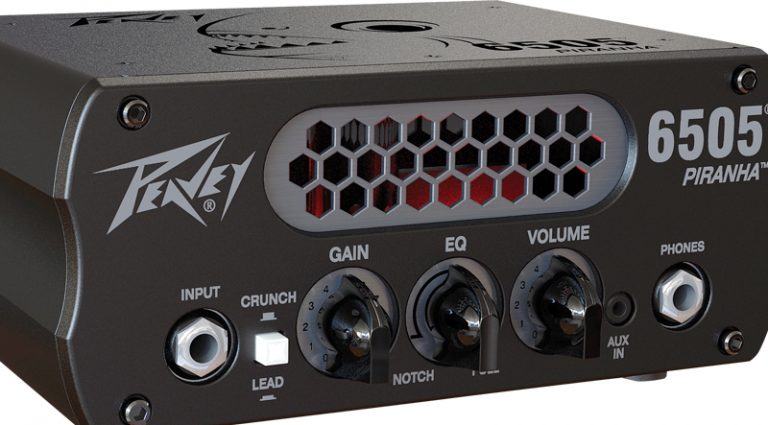 At roughly the size of a Harry Potter hardcover, the Peavey 6505 Piranha Micro Head is a small yet fully functional tube head that fits in a gig bag or mounts to a pedal board. Weighing just 2.5 pounds, it boasts 20 watts of output in a hybrid design – a single 12AX7 in the preamp for tone shaping, and a solidstate power section.

Out front, Peavey placed an input jack along with controls for Gain, EQ, and Volume. There’s also a push button for Lead or Gain modes, mini Aux In, and a ¼" output for headphones. Flip the Piranha around to see the Power on/off button, DC power jack, and ¼" jacks for speaker and effects loop send/return.

Through a 1×12 cabinet with an 8-ohm Eminence speaker, the Piranha’s Crunch channel sounds cleaner than Lead, and true to Peavey’s 6500 series, Lead offered an abundance of molten tone-lava. Turning the Gain to 9 o’clock resulted in light overdrive, but as the level was increased, the Piranha churned out the kind of crunchy overdrive craved by metallurgists. With just one EQ knob, the cab plays a significant role in the determination of available bass (through a 1×12, the Piranha was on the bright side). Still, most heavy guitarists will be thrilled by its wickedly saturated gain.

The Piranha is a rock machine whose clean capabilities are limited to turning down the Gain knob and playing lightly, while Crunch serves up light dirt for rhythm work.

The effects loop in back patches-in time-based or modulation effects; the Send jack also works as a line-level out to feed the input of another amp, turning the Pirahna into a tube-fueled overdrive box. And if mounted on a pedalboard when the big amp goes down, it could be quickly rerouted to the speaker/cab.

Though the Piranha lacks a control for low-end response or a heavy-duty power jack, with a price about the same as a stompbox, this is a cool piece of gear that dishes out raging distortion. And used as a practice amp or as a backup, the 6505 might just save your next gig. That alone is worth the price of admission.

The Senn by Eastwood Model One