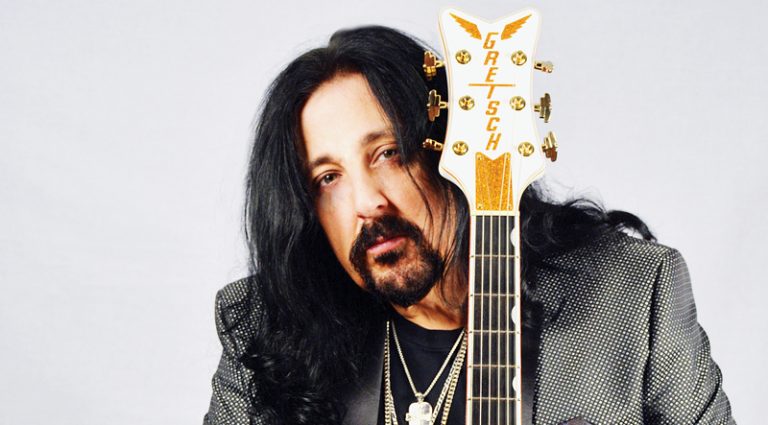 Recognized worldwide as a master technician, southpaw shredder Jimi Bell first received widespread notoriety for his role sharing a nightclub stage with Joan Jett in the 1986 film Light of Day, which starred Michael J. Fox. His lightning-fast picking then got him an invitation to audition for Ozzy Osbourne, where he was edged out by Zakk Wylde. Swinging to another branch of the Black Sabbath family tree, he joined bassist Geezer Butler’s solo band. For that project that he wrote “Master of Insanity,” which was used on Sabbath’s 1992 album, Dehumanizer.

After several national and European tours, Bell joined the melodic hard-rock band House of Lords in 2005, put together by Gene Simmons, and subsequently has recorded six albums with them. The band is writing and recording a seventh, tentatively titled Saint of the Lost Souls.

Going back, what initially drew you to music, and how old were you when you started playing guitar?

After trying several instruments, I became a drummer from the age of 10 until I was 13, when I won a scholarship from the Hartford (Connecticut) Conservatory. While in junior high, I jammed with some high-school friends. The guitar player left his Guild Starfire, Heathkit amp, and his Big Muff at my house. I decided to try his guitar through the Big Muff. At that moment, I instantly fell in love with the guitar.

Who were your big influences back then?

Definitely Johnny Winter’s Live And album with Rick Derringer… it just blew my mind. I kept playing the song “It’s My Own Fault” over and over again. Johnny had so much fire and speed, I thought that was what it meant to be a good guitar player – you had to be fast. Of course, that changed later on for me. I also dug the Grand Funk live album. I then discovered Deep Purple and became a huge Ritchie Blackmore fan. After that, I started listening to a lot of guitar players. In the end, my guitar style was derived from Johnny Winter, Ritchie Blackmore, and Al DiMeola, whom I discovered later on.

Do you remember your first good electric guitar and amp setup?

I went to see Chuck Berry at the Bushnell Auditorium, and when I got home, my dad had brought a semi-hollow Ovation Eclipse and an Ovation Dude amplifier. Being a Blackmore fan, I decided that I needed a Strat, so on my first trip to 48th Street in New York, I bought one – a lefty ’70s sunburst. It was wired as a righty, so the pots worked opposite of how they should have. I got so used to this, and later ended up reversing the wires on other lefty instruments I got. At the time, I also got a 50-watt Marshall Mk II half-stack which I’d overdrive with a Hawk booster. Shortly after, I got my first Gibson SG, which ended up being my main instrument for the next 10 years.

What are some of your favorite guitars in your arsenal?

In the ’80s, I had a full Kramer endorsement, and also really got into Flying Vs, Explorers, SGs, and Les Pauls. Lately, I’ve been using custom-built guitars by Dale Roberts, of Jacksonville. I also own three beautiful great Gretsch guitars.

What is your go-to guitar-and-amp rig these days for live work?

When I’m on tour, I use the Dale Roberts guitars exclusively. Amp wise, I request a Marshall DSL100 or TSL100. I have three stompboxes on the floor… never rack gear.

Tell us about the band and the new album. How did you go about putting the guitar parts together?

In 2005, after years of inactivity, House of Lords singer James Christian approached me about putting the band back together and writing melodic rock music. Of course I said “yes,” even though I never had done so before. For every album, I first present 15 to 20 song ideas to (drummer) B.J. Zampa, and he helps with the arrangements. Then, the songs get sent to James, where he decides which ones are best for the band. James then develops the melody lines and lyrics, and depending on the song, I might add finishing touches.

Where can folks see House of Lords live?

The band tours Europe all the time and has done Loud Park, the biggest festival in Japan. But we do have plans to do more shows in the U.S.