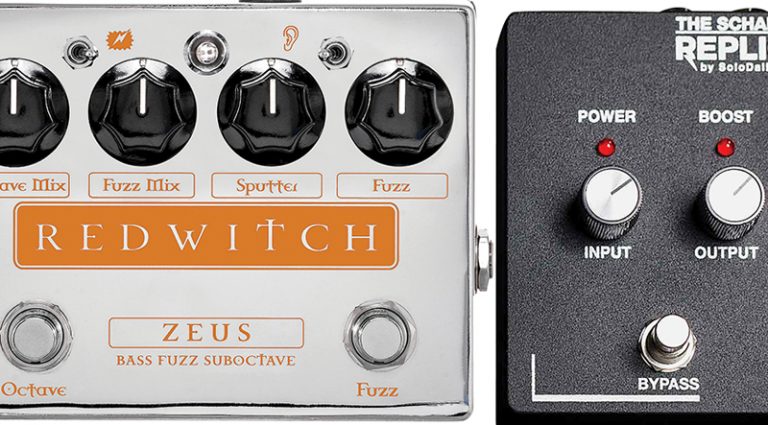 Fuzz and octavers are among the hottest pedals around, with some builders even melding them to great effect. The Red Witch Zeus Bass Fuzz Suboctave is one such box. It’s designed for bass players, but guitar players will crave it, too.

An all-analog design featuring silicon-based fuzz (fueled by two BC109 transistors, same as the Red Witch Fuzzgod), the Zeus Bass has four controls arranged like a mixer. An Octave Mix control brings in the dry-to-wet octave sound; “Off” is full off/bypass, or turn it full up for an entirely processed tone. The Fuzz knob sets the fuzz-tone level while Fuzz Mix brings in just the right amount.

Sputter is another feature showing up more these days, imitating the staccato, farting sounds of 8-bit audio or a battery crapping out. On the surface, it seems like a negative, but on the job it’s one of the coolest effects in town. The Sputter knob makes a fair amount of crackling, but that’s the circuit adjusting the DC bias, which is normal.

Used with a Relic Guitars Hague model, a Musicvox MI-6 bass, and a 1×10 Class A tube amp, the Zeus Bass Fuzz delivered massively fat tones. The fuzz is musical and warm, unlike some brash, nasty square waves. Dial in the gigantic suboctave effect for lo-fi, psychedelic city, perfect for everything from Jefferson Airplane to Sonic Youth. Ladle on some Sputter that harkens back to early-’70s Frank Zappa, Jeff Beck, and Stevie Wonder. Playing the greasy riff from “Superstition” on the Zeus resulted in pure sonic ecstasy.

The Schaffer Replica by SoloDallas is an out-of-left-field unit based on the monster tone of AC/DC’s Angus Young. One of Angus’ secret weapons was the Schaffer-Vega Diversity System wireless unit, the first of its kind to gain a toehold among players of the late ’70s. The curious thing is that the old SVDS had such a great preamp and unique gain character that Angus also used it in the studio just a few feet away from his Marshalls.

The Schaffer Replica is an authentic recreation of that unique circuit, giving a powerful boost in front of a tube amp. The pedal just has three controls: an on/off footswitch, input, and output. Basically, turn the effect on and decide how much you want.

The Schaffer Replica uses the two-step “companding” process to smack the front of a tube amp, much like an overdrive pedal. “Companding” is a telecommunications term indicating a signal is compressed on one end and then expanded on the other end – sort of the audio equivalent of a compressed .ZIP folder. The unique SVDS circuit takes the input signal and proceeds to warm, fatten, and generally pump it up. Whether used with a Strat into a clean Fender amp or an SG into a plexi Marshall, tone becomes more exciting and lively.

The Schaffer Replica is such a simple pedal that it needs to be heard for one to understand its cool factor. Plug it in, step on the footswitch, and marvel at its killer tone. Angus knew it was a great circuit 40 years ago. Now you can hear it for yourself.