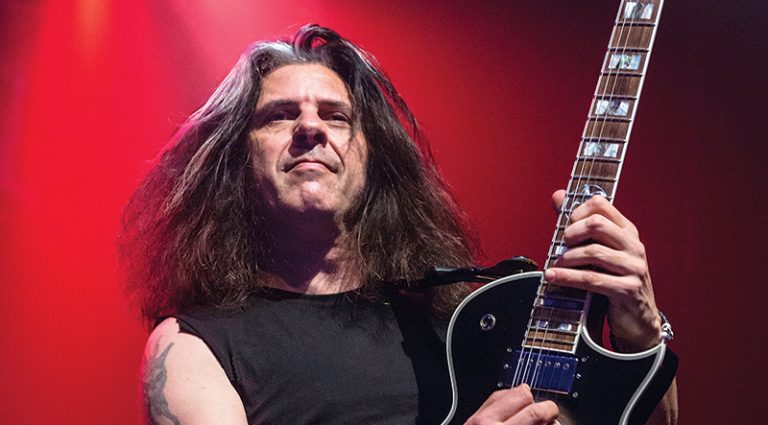 The worlds of metal and jazz guitar couldn’t be more opposite – one specializes in volume and riffing, the other on restraint and strumming. As guitarist for thrash metallists Testament and leader of a trio, Alex Skolnick has carved niches in both.

What’s the story with the latest Testament album, Brotherhood of the Snake?
It happened after a lot of touring with the band, so everybody’s chops were well-oiled. But there was a sense of it being rushed; we didn’t get to jam on the songs. It was done when Eric [Peterson, guitar] and Chuck [Billy, vocals] found tiny windows of time and the rest of us were involved in different projects. Some tracks have riffs Eric and I had worked on together. “Neptune’s Spear” just didn’t make it on to the previous album, but it’s got a Baroque counterpoint section I came up with. Even though it was done in a rush and a slightly different direction, it sounds really good. Production-wise, it’s one of the stronger records.

Is it difficult to switch gears – play metal, then jazz?
Not anymore. It was when I dove into jazz for the first time: I had to take a sabbatical from most other music. Once I re-entered the metal world, when Testament reunited [in 2005], I was doing more of it. I never stopped it entirely, but it wasn’t my focus. Once I started again in the 2000s, it took a while, but when shows were scheduled, I gave myself months to review, then after the first day thought, “I’ll have this in a week.” Maybe 72 hours later, it came back and never left.

The tones I use for each are very different, the volume is different. With jazz, I’m not playing through a wall of amps, next to a bass that’s so loud I have to wear earplugs. When I play jazz, the whole band is not as loud as one instrument in a metal situation. So you’re going to play different. When I play metal, I don’t have a hollowbody or a semi-hollow acoustic with this clean, natural tone that brings out chord melodies. I have this very crunchy sound. Each lends itself to different playing.

Which guitars do you use?
It depends, but my one overlap is my ESP signature model, which is handcrafted. There’s also the LTD version. To me, it captures everything I want and feels effortless for moving around the neck and its fluidity. And, it has many tones. It’s my go-to guitar for Testament and other heavy projects like Metal Allegiance. But it’s been finding its way into other work, as well. I do a lot of jazz-rock; I’ve been touring lately with Stu Hamm, and the guitar sounds great. I’ll find different tones. Or the Jane Getter Premonition… she’s a great artist and has Chad Wackerman on drums and Adam Holzman, from Miles Davis’ band [on keyboards]; that brings out a whole other side of that guitar.

With my Trio, I split between that guitar and one called the Montreal Premiere, made by Godin. It’s a semi-hollow; for the longest time, I never saw the point of the semi-hollow because I always thought the sound is closer to an electric than a full jazz box like a 175 or an L-5. But this one, I flipped out over because it has the elegance of a hollowbody yet doesn’t feed back much. I can distort it and it still sounds great. I can do a screaming solo in the same song as an elegant chord melody, which I actually do in “Dream On” by Aerosmith, which that I’ve revamped and put on the new Trio album, Unbound. It’s very inspired by McLaughlin and Hendrix.