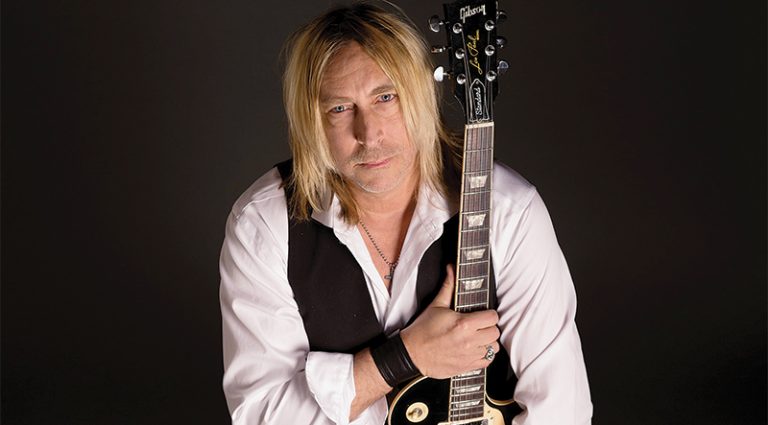 Manhattan native Paul Nelson has been influenced by many great guitarists – some of whom gave him lessons, gigs, and/or recording opportunities. But that hasn’t kept him from recording two solo albums on his own terms.

While attending Berklee School of Music intent on a career in the field, Nelson focused on expanding not only his skills, but his knowledge of music in all forms.

“I knew I’d have to listen to as many guitarists as possible, including jazz, country, rock, and pop artists, and everything in-between,” he said. He also took lessons from Steve Vai, Steve Khan, and Mike Stern. His 2001 solo debut, Look, was a nod to fusion.

“I love players like Eric Johnson, Joe Satriani, and Jeff Beck,” he said of it. “I was very pleased with how well it was received. I tried to create a fusion record with song structure and melody, along with stretching the technical boundaries of the guitar.”

Given his serious attitude from an early age, he developed a preference for serious guitars.

“My first real instrument was a Telecaster, followed by a Firebird,” he recalled. “Soon after, I made an effort to play everything I could get my hands on. Plus, I’ve always been fascinated by the construction of a guitar and the elements that go into it. That has helped me get the tones I look for.”

His career has included work with many of his heroes; a 10-year affiliation with Johnny Winter is the highlight of his sideman ventures. And yes, he recognizes the irony in the fact that he, a Texas guy in a blues band, has an affinity for – and capabilities within – fusion.

“My role didn’t change at all,” Nelson said of his tenure with Winter. “He was a fan of my playing, as well, and let me do my thing. Johnny appreciated my ability to complement his playing in such a way as to not conflict with how he played. On several occasions, he told me how it was ‘a constant guitar battle’ with his past players. He told me, ‘I know you can play as well, even better than them. But I really like the way we play together without stepping all over each other.’”

These days, Nelson counts on numerous guitars to ply his trade.

“Right now, I play everything under the sun, depending on the recording situation; I’m involved in so many projects,” he said. “I mostly play Stratocasters and Les Pauls, along with Taylor acoustics. I really like the guitars sent by GJ2, and I’m very excited about my new signature model that Delaney Guitars is building.”

Badass Generation is credited to the Paul Nelson Band rather than being presented as a solo effort, and he described the difference between it and his ’01 album as “night and day.” Also, its direction away from straight blues was very intentional.

“It’s a mix of many influences from blues to rock, jam, pop, Southern rock. I feel we’re at a good point in music now where one can mix it up more on a single recording and not just be stuck in one style. I think it shows the diversity of an artist or band and gives the listener more.”

Unusual tones include what sounds like a slide on “Please Come Home.”

“Many times, I play slide style without a slide; it’s kind of my own invention. I’m a big fan of the Duane Allman and Johnny Winter style of slide playing, as well, so that might come into play now and then.”

As for personal favorite solos on Badass Generation, Nelson was ambivalent.

“I was really happy with all my solos, as I really tried to make them part of the song,” he said. “Even songs within themselves. If I had to pick one, it would be in ‘Goodbye Forever.’ There’s a little nod to Johnny in there, as well.”

Nelson and the band began touring in May, and in addition to its efforts, Nelson has more than one collaboration on the horizon.

“My good friend Jimmy Vivino and I are on a Paul Butterfield project coming out soon,” he said. “I’m also producing and playing on a Junior Wells album with a great list of artists.”