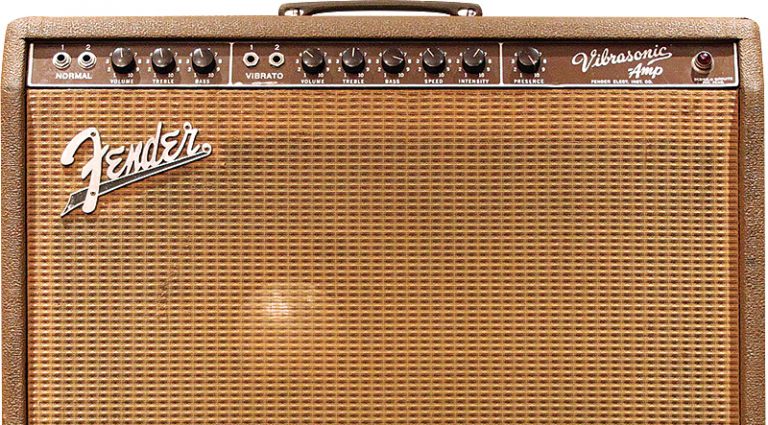 A mid the major hits and enduring classics in Fender’s amp lineup of the 1950s to mid ’60s, some of the most interesting are those that remained in production only a short time. Often, the lack of prolificity had little to do with their theoretical success as designs and more to do with timing, a slight misjudgment of the market, or both. Such is the case with the brownface Vibrasonic.

A trailblazer as Fender’s first Tolex-covered amp with forward-facing control panel, it was released in 1959 in its 5G13 format a year before the date usually associated with the arrival of Fender’s modernized styling for amps (several tweeds were produced well into 1960 and a few into ’61). The Vibrasonic was hugely successful at what it aimed to do, but Fender chose to make it, watt-for-watt, by far its most expensive amp at the time – possibly the most expensive ever, by that standard; with a list of $479, it edged out the Twin at $429 and crushed the similarly equipped Pro at $289. In 1962, only the Showman cost more ($550 with the 1×12″ extension cab, $600 with the 1×15), but factoring for the cost of that amp’s piggyback setup and 100-watt rating, the Vibrasonic still came off pricey, which contributed to low production numbers and its scarcity today.

All that aside, though, it was hugely historic, and is still an extremely desirable combo as it stood three years later in the 6G13-A format. The new covering and forward-mounted controls might be its most talked-about design features, but the Vibrasonic was also the first Fender amp with solidstate (diode) rectification, the first with a JBL speaker as standard equipment, and the first Fender above 20 watts with built-in tremolo. Moreover, as the first amp in Fender’s new Professional series, it was intended to be just that. Even once it was accompanied by the full range of brownface models, as it was by the time of our featured example’s production, the Vibrasonic was built as the biggest and beefiest of Fender’s 50-watters, though almost every feature was also shared by another of its siblings. Its schematic was identical to that of the Concert, Pro, and Super of the era; the Concert, Twin, and Vibrasonic used the same robust power transformer, while the Twin and Vibrasonic had the same output transformer (the change of speaker load from four ohms in the Twin to eight ohms in the Vibrasonic ably compensated for the move from four 5881 output tubes to two, respectively).

As such, the 50-watt 1×15″ Pro and 50-watt 1×15″ Vibrasonic make for interesting side-by-side case studies. All else being equal – as it literally was between these two combos – the addition of the larger transformers and change of 15″ speaker from Jensen to JBL barely accounts for the whopping $190 upcharge. Sonically, though, the player willing to pay the difference could certainly hear the results in the Vibrasonic’s increased headroom, enhanced articulation, and firmer low-end response. That said, Fender certainly sold a lot more Pros, so make of that what you will.

By design, the Vibrasonic was an amp for serious players who wanted to be heard, and in 1962 – from Fender’s perspective, at least – that still equated to maximum clean power and punchy, cutting tone, the kind of thing equally suited to reproducing pedal-steel guitar as to the firm Telecaster (or even Jazzmaster) twang of Luther Perkins. Today, however, many players are more likely to be enamored of the earlier grind that the Pro’s smaller output transformer elicits into its Jensen speaker.

Despite all of its major “firsts,” the feature about which players tend to rave most is something else the Vibrasonic has in common with its mid- and larger-sized brownface compadres – its tasty harmonic vibrato. This effect started in 1959 as a complex circuit using a full two tubes (that’s four individual triodes) to induce a phasey wobble on the signal of one of the amp’s two channels. With the revision to the 6G13-A circuit, however, Fender added yet another 12AX7 (of which it used only half), introducing a cathode-follower stage to a somewhat altered rendition of the effect, which now required a full two and a half tubes to get the job done. Though Fender liked to call it vibrato, and it certainly sounds closer to that than the downright tremolo-inducing circuits that had come before, this lush, watery modulation effect only comes close to approximating true vibrato, but creates a luscious, phasey sound nonetheless. Lovers of true tremolo might find it soft and burbling compared to the rhythmic chop of true tremolo – a circuit much easier to render in most guises – but it is a dramatic and hypnotic sound in its own right, and one that can quickly become addictive. As the brown amps evolved into the blackface range in late 1963 going into ’64, this complex pseudo-vibrato was lost to a simpler true-tremolo circuit that required just one preamp tube plus an opto-cell network.

The Vibrasonic you see here belongs to a reader in the United Kingdom, and has a step-down transformer mounted in the bottom of the cab and hard-wired to the chassis’ AC input, to convert the mains voltage from the U.K.’s 240-volt to something closer to 115 volts. Plug in a vintage-spec Tele or a pedal steel and it’s a fast track to Fender’s prime concept for bold, clear, professional tone circa 1962.

Special thanks to John Teagle and John Sprung, authors of Fender Amps: The First Fifty Years.