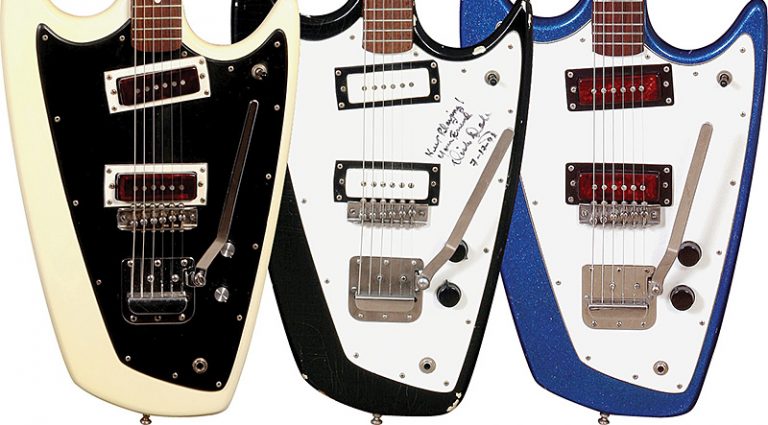 Bob Shade exemplifies the adage “Imitation is the sincerest form of flattery.” The guitar builder has an enviable assortment of ’60s Hallmark guitars and basses, and they’ve inspired his own creations.

Hallmark was founded by Joe Hall (1938-2011), a former Mosrite employee who in 1965 opened a shop in Arvin, California, just down the road from Mosrite headquarters in Bakersfield. Hallmark’s signature model was the Swept-Wing, a modernistic instrument with a silhouette that resembled the “scoop” on the side of a Corvette body.

Hall dressed his instruments with certain Mosrite parts such as strap buttons and bridge saddles, and had an informal partnership with another Mosrite defector, Bill Gruggett (1937-2012), who in the late ’60s also made instruments bearing his surname. Decades later, Hall and Gruggett were affiliated with Shade’s modern Hallmark venture.

Hallmark’s early lineup consisted of solidbody guitars and basses made from alder or mahogany. Their bolt-on maple neck was two-piece laminate and the fretboards were rosewood with a zero fret; guitars had a 25.5″ scale, basses were 30″.

“It was a great neck, because if you sliced [the wood] in two pieces, reversed one, then glued them together, its stability was as good as a quartersawn neck,” said Shade, who also noted the interesting chronology of their pickups.

“Joe designed them in 1966 with alnico magnets running through the top of the cover to the bottom of the pickup,” he said. “It was similar to what Fender was doing at the time, but in a very Bakersfield sort of way.” But, after being threatened with legal action for the design, in ’67 Hall reverted to a design he’d been using since his early days as a builder in the late ’50s.

“That pickup had adjustable pole pieces and two flat alnico magnets under the coil,” said Shade. “Joe had made some of this style when he was commissioned to build several prototypes for Standel. He’d also used the design for the Sterling brand of guitars he made in the early ’60s, which were hand-built with fancy scrolls, hand-formed aluminum hardware, and fancy plexiglas pickguards.”

“Hallmark was not set up in the early days for their own vibrato system,” Shade detailed. “The first Swept-Wing guitar with one had a Kapa vibrato and bridge, made in Hyattsville, Maryland. Joe ultimately decided not to use Kapa hardware, and instead went with a Japanese tailpiece that was similar to Fender’s design. Later, he had a local machinist replicate the Japanese one, but it was heavier and worked better than the earlier Japanese vibratos.”

An early black solidbody Swept-Wing in Shade’s collection has a ’66-style neck-position pickup with non-adjustable pole pieces and a ’67-style pickup in the bridge.

“It’s the only one I’ve ever seen like that,” he said. “I wonder if it was built for someone special, or did they run out of ’66 pickups that day? It’s anybody’s guess.”

In 1967, Hallmark began to make semi-hollow Swept-Wing guitars and basses (labeled as “acoustic” on an order form) by routing solid bodies and covering them with a veneer of marine-grade laminated maple. It also briefly flirted with making a Swept-Wing for a brand called Epcor, started by Ed Preager, who otherwise used thinline hollow bodies imported from Italy with symmetrical cutaway horns (similar to a Gibson ES-335). Though a prototype was made, it went no further.

Hallmark tried advertising its line in appropriate periodicals, and one ad in an issue of Hullabaloo magazine proclaimed the Doors used the brand. By the time that periodical changed its name to Circus in 1969, Hallmark had already foundered, as had the Gruggett brand. Mosrite’s chronology would continue through the ensuing decades and ultimately include factories in North Carolina and Arkansas.

Shade is still fascinated by such brands and models, and still seeks examples from the Bakersfield area’s unique place in American guitar history.

Special thanks to Bob Shade for providing photos.