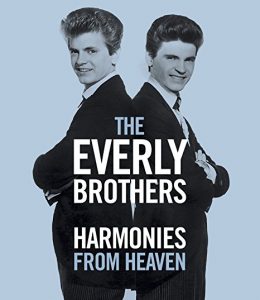 If you’re weary of rock concert DVDs with critical commentary, typically unauthorized and of varying quality, this Everly Brothers retrospective is highly recommended.

Authorized, with participation of Don Everly and a 2010 interview with his younger brother, the late Phil Everly, it’s an expanded version of a 2016 BBC airing, including a previously unseen 1968 concert for Australian TV.

In addition to their country-rooted sibling harmonies, they were perhaps the first rock act to put the acoustic guitar front and center – rhythm essentially as lead. Don often used open G tuning, as on “Bye Bye Love” and “Wake Up Little Susie.”

Performances of those hits are shown as well as “All I Have To Do Is Dream,” “When Will I Be Loved,” and “Cathy’s Clown” – the latter backed by the Crickets.

It downplays their ’83 reunion and doesn’t mention their 1970 TV show, which featured father Ike, a pioneering fingerpicker. Quibbles, however, regarding this definitive story of rock’s most influential duo.