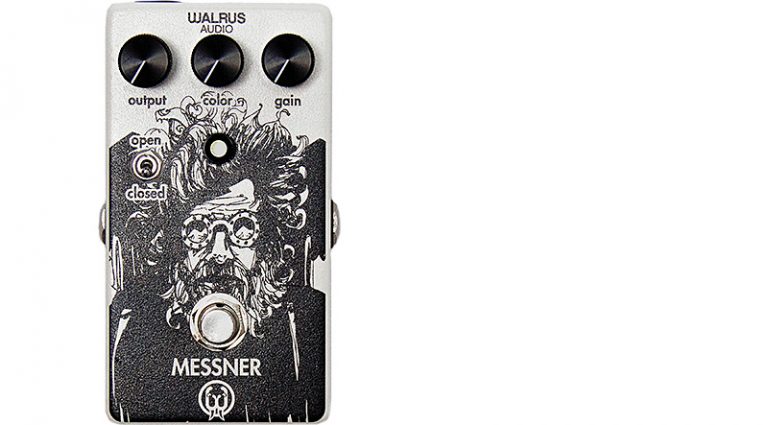 First off, who the heck is this Messner guy? Well, in 1978, mountaineer Reinhold Messner became the first person to scale Mount Everest without the help of oxygen tanks.

Cool, but why name a stompbox after him? In crafting this namesake pedal, Walrus Audio is striving to capture the pure, crystal-clear air atop the world’s highest peak and re-create that vibe with a likewise thoroughly transparent overdrive. The result is a low-gain drive that carries your signal to new heights, while not interfering with the guitar’s natural tone.

Fear not, the Messner still boasts a wide range of overdrive sounds. Using the Color control, you can dial in – or out! – the exact amount of pedal-influenced tone that you want.

To see how it fared, we ran a ’57 Fender Esquire into the Messner, then directly into a new Vox AC10C1.

The Output knob controls the overall pedal output, natch. But twisting the Color knob lets you tweak your tone darker or brighter – or level it in the middle and be transparent. This latter approach allowed the Esquire’s natural trebly tone to glisten like newly fallen snow.

The Messner’s Gain control adjusts how much your signal is clipped in overdrive. You can range from a clean sound to a blizzardy breakup.

We loved the color we could add to the Esquire. The Messner provides a mildly overdriven sound with clean tones that created a great countrified Bakersfield twang or a CCR-like growl with just the right edginess. Pushing the boundaries northward – and driving the miniature Vox AC30 hard – the output ranged from electrified, lowdown Delta blues to something harsher and heavier, à la grungy rock.

But that’s not all. A toggle switch lets you bypass the circuit’s clipping diodes. In the Open position, the clip is out, offering a subtle low-compression, more open-sounding drive that remains suitably aggressive. Very natural, very – dare we say – Reinhold Messner.

Switching to Closed position, the clipping diodes give a compressed sound with a smoother breakup texture. The grind is downright lovely – punchy and ready for a fight.

The Messner is not a Dallas Rangemaster, Tube Screamer, or Big Muff. In a word, it’s a sublime low-gain, dynamic overdrive that’s transparent and tweaks your tone, compression, and drive just right. And the more you play it, the more you’re going to love it.