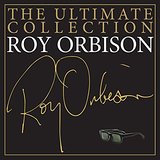 Playing the role of a lonely, heartbroken teen, Roy Orbison was the Enrico Caruso of early ’60s pop, his voice gracing more than a few torchy hits. “Oh Pretty Woman” from 1964 remains his greatest moment and it has a riff for the ages: the session featured multiple guitarists, but you can hear Roy at the beginning on an Epiphone Bard acoustic 12-string. The song also marked the rise of “the riff” as a potent compositional device in rock (along with the Kinks’ “You Really Got Me,” from the exact same period). It’s essential rock and roll.

“Mean Woman Blues” is an uptempo cooker with piano, sax, and a blistering guitar solo.

In the ’80s, Orbison connected with ELO’s Jeff Lynne for a late-career revival, yielding the Traveling Wilburys cuts included here (“Not Alone Anymore,” “Handle With Care”), as well as solo gems “You Got It” and the thrilling “I Drove All Night.” Orbison died suddenly in 1988.

So, is this really the “ultimate collection” of Roy Orbison songs? It’s pretty damn close.