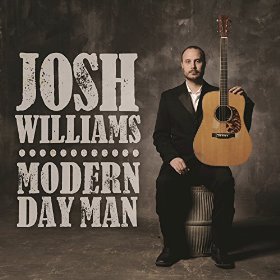 Josh Williams would be the first to tell you he’s heavily influenced by Tony Rice – vocally and instrumentally. Rice has had vocal-cord problems since the ’90s, and in a cosmic “irony,” arthritis has made playing guitar difficult – robbing the bluegrass world of one of its great singers and possibly its best flatpicker ever.

Not that Williams is a carbon copy or can “replace” Rice, but the similarity will bring a smile to ’grass fans when his voice dips down for a baritone phrase or a fleet, round-toned lick shoots by so quickly, the banjo has taken over while you’re still digesting what you just heard – as on Tom T Hall’s “Another Town.”

Williams cut his first album when he was 10, but this is the first in six years for the award-winning 36-year-old, best known for his work with Rhonda Vincent and the Rage. The bandleader was forced to fire Williams in ’07, owing to drugs and alcohol, but it’s a testament to his recovery and Vincent’s faith in him that she rehired him in 2012. Welcome back, Josh.