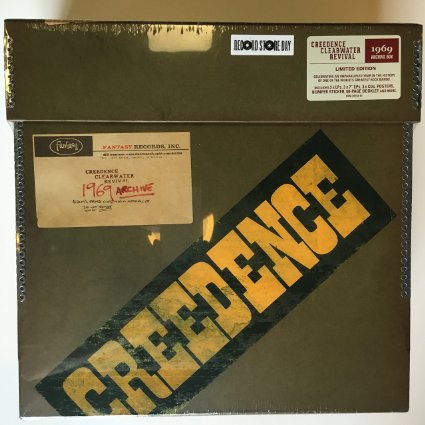 What band has ever had a year like Creedence Clearwater Revival did in 1969?

After its debut in ’68, John Fogerty’s group released a followup, Bayou Country, in January ’69 and “Proud Mary” soon raced to #2 on the Billboard charts. Over the coming months, the band delivered two more Top 10 LPs: Green River, which went to #1, and Willy and the Poor Boys, which struck #3 highlighted by more hit singles – “Fortunate Son,” “Bad Moon Rising,” “Down On The Corner,” and “Green River.” And they even found time to cut a fourth album, Cosmo’s Factory, that would be released in the new year. Along the way, CCR toured the United States, played “The Ed Sullivan Show” (twice), and headlined at Woodstock. By year’s end, they were one of the biggest bands in the world.

The 1969 Archive Box celebrates the annum in grand fashion. No, there’s nothing really new here; you’ve heard all of these songs before, but the package is phenomenal.

This limited-edition set was released for Record Store Day, and if you’re a CCR fan you gotta have it.