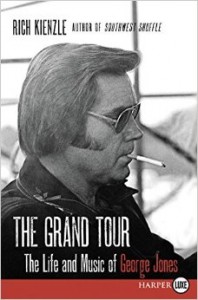 VG readers won’t be surprised to learn that contributor Rich Kienzle’s comprehensive bio of George Jones is a great read and a dispassionate chronicle of his drive-in movie of a life.

While the 2015 memoir The Life of George Jones by Jones’ erstwhile guitarist Earl “Peanutt” Montgomery romanticizes George, including his early years in Texas’ Thicket region, Kienzle’s narrative is more realistic, detailed, and no doubt more reliable. To Montgomery, Jones recalls a loving home life marred mostly by “turmoil” between his parents, and leaves it at that. Kienzle delves deep, writing of spare meals and a father, industrious when sober but violent when drunk, turning on his wife and kids without any provocation, real or imagined.

Kienzle also shines light on Jones’ own guitar picking. In fact, he began as a guitarist, playing serviceable lead in his first group with a husband and wife who added the then Glenn Jones to form a trio.

Along with all the tabloid tales – no-shows at concerts, dramas with Tammy Wynette, and the famed drunken journey on a riding lawn mower to get more booze – Kienzle chronicles Possum’s musical output, recording sessions, and numerous stellar sidemen.