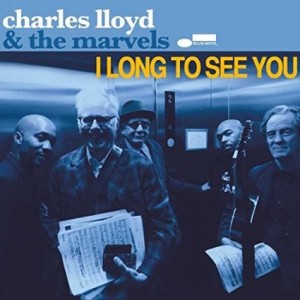 It doesn’t take a genius to realize that adding Bill Frisell to a project will yield great results. But teaming him with jazz saxophonist Charles Lloyd was a master stroke, in large part because the sensibilities he brings are at least as important as his guitar talents.

For instance, it’s hard to imagine Lloyd choosing “Shenandoah,” a sea shanty from the early 1800s that’s been recorded by a gamut stretching from Dave Alvin to Judy Garland (as well as Frisell). But his round tenor tone perfectly marries the melody, with Frisell’s crystalline fills and Greg Leisz’s economical steel deftly complementing it.

Leisz’s presence is also a Frisell byproduct – the two having worked together extensively. Though he’s recorded with a who’s who of artists, from k.d. lang to Eric Clapton to the Bangles, jazz is not typically in Leisz’s wheelhouse. But while he and Frisell pull Lloyd into so-called Americana territory, they meet the jazz icon more than halfway. Latin flute workouts “Sombrero Sam” and “Of Course, Of Course” have been originals in Lloyd’s repertoire 50 years, but the former begins with a five-minute Frisell intro, while the latter’s pedal steel solo seems right at home.

Nice cameo vocals by Norah Jones and Willie Nelson do nothing to detract from this fine eclectic “jazzicana” album.