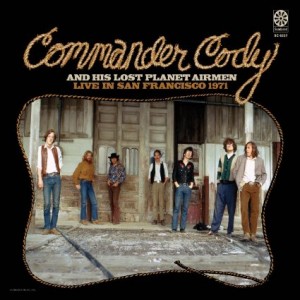 On July 11, 1971, Commander Cody and His Lost Planet Airmen, a pioneer of country rock light years from either Gram Parsons or the Eagles, appeared on KSAN-FM in San Francisco, a performance captured on tape.

The 14 tunes feature several Airmen standards: “Seeds And Stems (Again),” “Wine Do Yer Stuff,” “Lost In The Ozone,” and the Hank Williams tune that inspired it, “I Ain’t Got Nothin’ But Time.”

Kirchen’s Telecaster skills are a constant. He’s firmly behind Cody on “Hot Rod Lincoln” and “Smoke! Smoke! Smoke! (That Cigarette),” backing Farlow on Buddy Holly’s “Midnight Shift” and accompanying himself on “Blues Stay Away From Me.” Pedal-steel guitarist Steve Davis (a.k.a. the West Virginia Creeper), offered rough, bare-bones accompaniment.

The Airmen, despite occasional ups and downs, evolved considerably in the years before they dissolved in 1977. This document captures them when it was all just beginning.