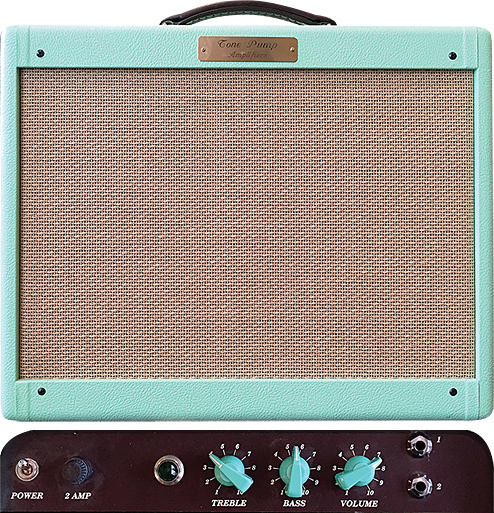 The story is a familiar one. A guy learns to repair amps and then gets frustrated with the shortcomings of the stock amps available. So he starts offering modifications to existing amps before going off the deep end. That’s when he gets the hare-brained idea to get into building amps from scratch.

Unlike most of this ilk, Tone Pump’s Scott Lorensberg is a true electrical engineer, not just a weekend tinkerer. So it follows that his designs are not just one man’s take on classic, oft-cloned schematics. Rather, they’re novel designs that provide interesting mixes of old and new. The Class A, single-ended 1×12 Tone Pump Solara Studio is one of Lorensberg’s six offerings.

The 12-watt Solara Studio is housed in a Tweed Deluxe-sized cabinet, but a variety of custom-colored tolex and tweed options are the first hints that this is not a simple 5E3 copy. (The review amp arrived sporting a sea-foam green tolex covering.) The Solara Studio utilizes a single EL34 in the power section, along with a 12AX7 in V1, followed by an EF86 in the V2 position. The EF86 in the V2 position allows it to add some of its forceful sonic flavor and higher gain without making it prone to becoming microphonic (usually the case when an EF86 is used in the all-important V1 position). The tone section consists of Treble and Bass knobs rounded out by a single Volume control and an off/on switch. Input 1 utilizes a single triode, while input 2 uses a parallel triode to produce higher gain and a different tonal palette. The Solara Studio’s speaker is a low-efficiency Weber DT-12, which has a more rounded high end that allows the amp to get dirtier at lower volumes as well as provide a smoother high-end character. (It never hurts to use a speaker that was designed for Derek Trucks.)

We tested the Tone Pump Solara Studio using a stock ’67 Telecaster and a ’69 ES-335. Plugging in, we were quite surprised by the amp’s full and ringing clean tone. While most single-power tube amps tend to be weak in the low end, and really only excel at amplifying highs and a boxy midrange, the Solara Studio exhibited a full, round, and useable clean tone. Furthermore, we would classify this tone (with its hint of extra mids) as being in the early-’60s low-powered Fender brown camp.

Handily, the tone controls are able to either boost or cut highs or lows, as they are “flat” at the 12 o’clock position. While plugged into input 1, and keeping the Volume knob lower than 12 o’clock, we were able to get rounded, throaty, swing tones with only a hint of sweet breakup from the neck pickup on our 335. Shifting the volume up, the Solara Studio gave way to a barking and, again, brown-sounding overdriven tone. And by simply lightening our touch or laying off the guitar’s volume a bit, we were back to the clean sound that drew us in to begin with. Moving to input 2 bumped up the volume and dirt level, while also giving the amp’s tone a harder “fist.”

Moving on to the Tele and back to input 1, we easily dialed in a great Memphis/Muscle Shoals Tele bridge-pickup tone by cutting a bit of treble and boosting some lows that were unnecessary with the fatter 335. Goosing the volume moved the tonal center across the pond with a plexi-like tone; changing to input 2 gave our fairly moderate-output Tele a great rock guitar tone.

The Tone Pump Solara Studio novel design surprised us with its ability to produce a full, clean sound and, with a little goosing of the Volume knob, a barky, brown Deluxe meets plexi-styled dirty tone. These qualities and a touch sensitivity that lets you go easily from those cleans to dirties without relying on pedals make for an excellent amp equally suited for the studio, the practice space, and low-volume gigs.