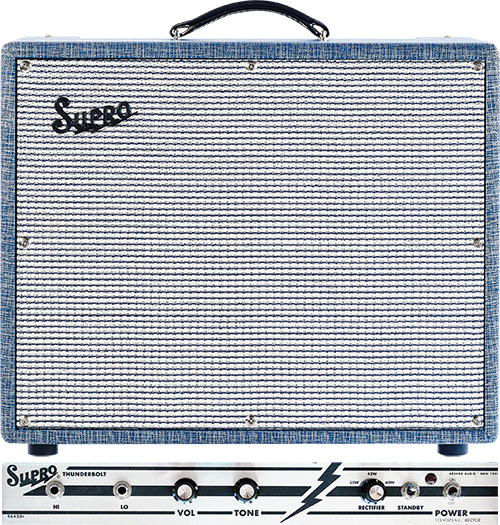 Upon introduction in 1964, the Valco-made Supro Thunderbolt Model S6420 was a misfit. Like Fender’s 4×10 Bassman, it was designed “exclusively for the electric Bass guitar [sic],” according to catalog copy. Further, the Thunderbolt was decked out in special silver-blue “rhino hide” tolex, signifying through a honking 15″ speaker. Despite the effort, it found few takers among bassists.

Then, as with the Bassman, guitarists discovered the amp’s virtues. They plugged in and quickly ascertained the T-bolt sounded better and better the more you cranked the “loud” knob. Over the years, it became one of those legends. The misfit had made good.

Now, decades after the demise of the original Supro venture, the brand lives again.

The new Thunderbolt S6420+ is a “vintage design by Valco” that’s “re-engineered and modified” by Bruce Zinky (former amp designer with Fender, responsible for the Vibro-King, and builder of Smokey Amps) and David Koltai (Pigtronix).

To put the new ’Bolt through its paces, we lined it up with an original ’64-’65 S6420 (special thanks to owner Peter Berge). The results were surprising.

The original Supro catalog promised the Thunderbolt included “no fancy extra circuits.” The new S6420+ remains true to that mission. Like the original, it dishes out 35 watts, more than enough to rock most small clubs, let alone a garage practice space. The all-tube S6420+ has a dual-6L6 powerplant, twin 12AX7s, and, in keeping with the original, a 5U4 rectifier (later originals switched to a solid-state rectifier to answer complaints of bottom-end flutter). The new Supros use a printed circuit board, enabling affordable prices, and are made in the good ol’ U.S.A.

The new Thunderbolt S6420+ adds a rectifier to the equation, allowing thrill-seekers to dial in more juice and volume. You can switch from the standard 35-watts Class A cathode-bias sound to 45-watt Class AB grid-biased mode (still via that tube rectifier), then all the way to a 60-watts Class AB setup through a silicon rectifier. These settings provide additional headroom and tonal variations. At full bore, the S6420+ just might shake your garage off its foundation.

The control panels of the ’64-’65 T-bolts were inaccessibly mounted at the bottom back of the cabinet; later models moved to the top. The new Supro wisely follows the revised design. It also has Normal and Hot inputs, ideal for vintage or modern guitars with low- or high-gain pickups. We tried the S6420+ alongside that mint/original ’64-’65 using a ’50s Gibson ES-125 equipped with a P-90 single-coil, and a modern PRS McCarty with humbuckers.

This is where things got amazing.

After initially looking over the stunning new amp, we wanted to be believers. But the point of a comparison with a rare, top-dollar, highly coveted vintage amp is to find faults. Try as we might, we couldn’t. These two amps sounded so similar, we couldn’t tell them apart.

The original T-bolt is renowned for its bold sound, and the new amp delivers. At lower volumes, it’s clear and big, just like ringing a bell (Johnny B. Goode would be thrilled). Turn it up, and the sound just keeps getting bigger. Chords remain defined with lots of headroom even as the tube overdrive and output-stage saturation reach a wonderful peak. The only real difference we could find is that the new Supro is louder at similar settings – and can get a whole lot louder yet.

Original T-bolts ran into problems with cabinets and baffleboards that couldn’t always handle rock-and-roll abuse. At 45 pounds, the new Supro weighs about half again as much as the vintage example, and a goodly portion of that is thankfully in the more-solid cabinet construction.

T-bolts old and new boast just two control knobs – Volume and Tone. And that’s all that’s needed, with neither tremolo nor reverb to get in the way of that tone. The Thunderbolt does one thing – and it does it oh so well.