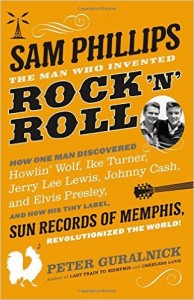 Sam Phillips was not a guitarist – though he did play drums and sousaphone in his high-school marching band. But he had great ears. And, in launching his Memphis Recording Service and later, Sun Records, he discovered or cut some of the earliest recordings on greats like Howlin’ Wolf, B.B. King, Ike Turner, Elvis Presley, Carl Perkins, Johnny Cash, Roy Orbison, and so many more.

Did Phillips truly invent rock and roll, as the subtitle of this landmark biography proclaims. Naw, no one person did. But if you had to point the finger at one man as being the most influential in shaping the music, well, Phillips is a fine one to blame.

Biographer Peter Guralnick has been working on this book for decades. And it’s a masterpiece, a worthy follow-up to his landmark two-volume biography of Elvis, as well as his earlier books on the roots of country, soul, and blues music.
The book arrives alongside a two-CD “soundtrack” of classic Sun sides. Plus Guralnick’s co-curated a new exhibit at the Country Music Hall of Fame entitled “Flyin’ Saucers Rock & Roll: The Cosmic Genius of Sam Phillips,” running through June 12, 2016.

Phillips opened his Memphis Recording Service in 1950 to record weddings, funerals, and other personal events for people, but he also sought to capture the soulful music he had heard in cottonfields, churches, and juke joints while growing up in Alabama. His recordings of early black bluesmen brought near derision from fellow whites, but Phillips heard something he felt driven to capture for posterity.

It was also the way he recorded music that made Sun sides special. Phillips never sought perfection; he wanted inspiration, and famously released tracks with errors and flaws – as long as they had the sound.

And he must have had his ears attuned especially for guitars – or maybe it was just that the guitar’s time had come. Either way, the number of fabled guitarists he recorded is legion: King and Perkins as well as Scotty Moore and unsung great Roland Janes.

For instance, Phillips’ recordings of Wolf not only captured but truly reveled in the stinging, overdriven guitar of Willie Johnson. And he’d later do the same with Ike Turner and Jackie Brenston’s “Rocket 88.” After guitarist Willie Kizart dropped his amp and his sound went all fuzzy, Phillips loved it – it was different. That song not only made history, of course, but the sound set the stage for guitarists ever after.