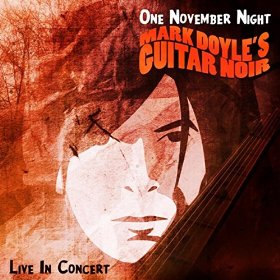 Mark Doyle put together a 10-piece touring band, complete with string quartet, last year after releasing several instrumental albums over a 15-year period. With that touring group he played mostly cuts from those records and has now released the result on this two-disc set that features all the guitar you could want.

The “Noir” part of the title is exemplified by cuts like “Perry Mason Theme,” “Guitar Noir,” and the entire first disc’s “In Dreams Suite” featuring songs about sleeping. And, yes, you know many of them. “Mr. Sandman” gets a jazzy intro and then a strong Beatles feel. “Dream Baby” is bluesy and funky with fine straight soloing and slide from Doyle and fellow guitarist Terry Quill. The big tone of “In Dreams” fits the Orbison classic perfectly.

Disc two has some Doyle originals that shine, including “Out Of The Past” with its mix of pop, jazz, and Indian music. Covers include a rolling version of the Beatles’ “Tomorrow Never Knows,” a haunting take on the Doors’ “The Crystal Ship,” a sublime “Warmth Of The Sun.” and a long, bluesy version of Cannonball Adderley’s “Jive Samba” that lets everyone solo.