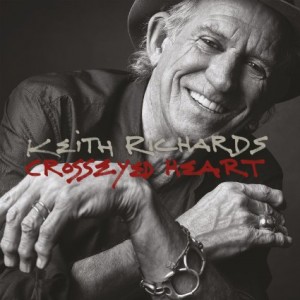 The old pirate may have just turned 72, but that doesn’t seem to have slowed him down. Welcome to Keith Richards’ third solo album – and his first in 23 years.

The album arrived in the midst of the hoopla surrounding the Rolling Stones’ Zip Code Tour, which must not have helped the obvious division between the Keef and Mick camps on stage. Not to mention the fact that Mick’s solo career has never truly gotten rolling, shall we say, while Richards’ extra-Stones activities have been universally hailed.

Keef first went solo with 1988’s masterpiece Talk Is Cheap, followed in ’92 by Main Offender and Live at the Hollywood Palladium, December 15, 1988. (At the same time, even mentioning Mick’s solo efforts feels like a cheap shot…)

The album follows the phenomenal breadth of musical styles that Richards brought to the Stones – and travels even further than Talk Is Cheap, which was largely R&B based. Like golden-era Stones, there’s blues (“Cross-Eyed Lover” and “Blues In The Morning”), rock (the single “Trouble”), and Keef’s beloved country, absent Mick’s sardonic take on the vocals (“Robbed Blind”). Joyfully, there’s even reggae (“Love Overdue”). And happily, no disco. The result is a true musical journey that follows Keef’s heart.

He’s teamed up with old friends here, and it shows in the easy-going vibe flowing through the music. X-Pensive Winos drummer Steve Jordan holds down the bottom end while Waddy Wachtel shares acoustic and electric guitar duties with Richards.

And, no surprise, there are guests. The late, great Stones hornman Bobby Keys brings his sax to “Amnesia” and “Blues In The Morning.” Multi-instrumentalist Larry Campbell adds pedal steel to “Robbed Blind.” The great Muscle Shoals organist Spooner Oldham plays on “Lovers Plea” while New Orleans singer Aaron Neville and his son Ivan Neville lend a hand on “Nothing On Me.” And last but not least, sweet-voiced Norah Jones sings a duet with scratchy-throated Richards on “Illusion,” making for an interesting pairing.

“Trouble” is classic Keef – even to the point of sounding like a Exile On Main St. outtake. A jaunty guitar riff, murderous tone, gruff vocals, and an all-around killer hook: what’s not to like? It may rival “Happy” as one of his best.

It’s obvious Keef’s having fun here, as he always seems to do. He’s playing music he loves and he’s playing it with unabashed joy.