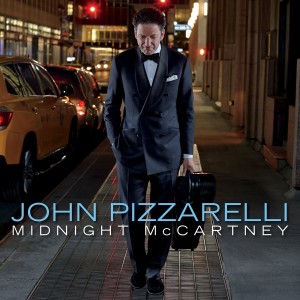 His 1998 mash-up album John Pizzarelli Meets The Beatles staked his claim as a hardcore fan, and he was subsequently invited to play on Paul McCartney’s 2012 pop standards album Kisses On The Bottom. Sir Paul himself suggested Pizzarelli tackle an album of his material.

In the past, Pizzarelli has done album-length explorations of Nat “King” Cole, Duke Ellington, Johnny Mercer, Richard Rodgers, and Frank Sinatra. Co-producing with his wife, singer Jessica Molaskey, he focuses on post-Beatles McCartney, and is backed by his quartet and guest musicians with Don Sebesky arrangements.

These aren’t the jazz/rock mashups of Pizzarelli’s earlier Beatles tribute or his 2012 Double Exposure album. The focus here is on the songs.

On records and onstage, Pizzarelli’s longtime approach has been welcoming to jazz and non-jazz aficionados alike. This time, he’s dialed back the jazz to favor the pop side.