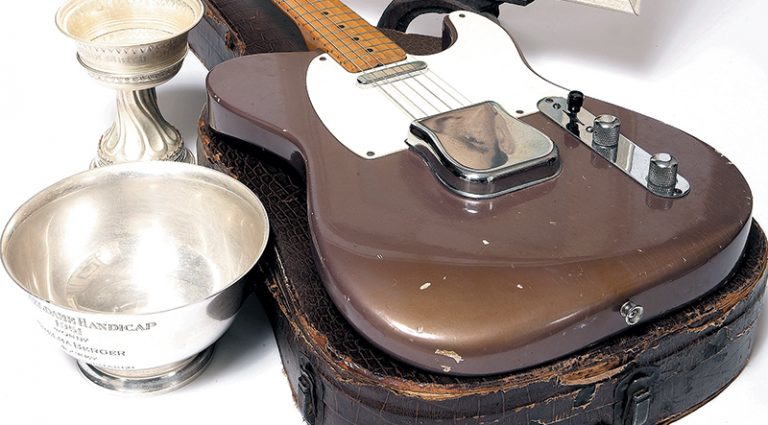 One day in the mid 1950s, up-and-coming thoroughbred jockey Bill Shoemaker – long before he gathered 8,833 career wins (including 11 in Triple Crown events) while running more than 40,000 races – was playing host to his friend, western swing bandleader Hank Penny, who had come calling with a special gift in a brown case.

A personal friend of guitarmaker Leo Fender, Penny had not long before received a set of custom-ordered Fender Telecaster guitars. But these weren’t your ordinary, run-of-the-mill Teles; bearing two distinct custom colors, the pair no doubt looked unique to the casual observer. But the trained eye would be drawn to the unique carved/rounded edges of the bass bouts – a feature ordinarily found on Leo’s “contoured” Stratocaster, but not the very slab-like Telecaster.

Penny was not only a renowned musician whose primary gig at the time was head honcho of the western swing band The Radio Cowboys, he was also a fan of horse racing who spent time at the track, which led to striking up a friendship with Shoemaker.

In late ’54, Penny and his wife, country-western singer Sue Thompson, paid a visit to the home of Bill and Ginnie Shoemaker, near the Santa Anita race track. And they came bearing gifts in the form of a guitar and amp they presented to Shoemaker. Penny had recently taken to playing Fender’s fancy new Stratocaster model and thought Shoemaker might have fun fooling around with the guitar.

“Bill always liked Western music,” Ginnie (who’s married name today is Van Hosen) told VG. “And he would tinker around with the guitar now and again, but couldn’t actually play it.”

Shortly after, Penny and Thompson moved to Las Vegas, where Penny spent seven years fronting a band at the Golden Nugget. Though the Shoemakers did make at least one trip to Vegas to see Penny’s show, the two couples eventually fell out of touch, and Shoemaker all but forgot about the guitar, which spent the next several decades in a closet. Until one day, when the Shoemakers’ son, John, asked his mother whether it was still at her house.

The simple query led to greater curiosity, and Van Hosen undertook the search for information. To date, her research has led her to believe the guitar is indeed one of two Telecasters that were contoured and custom-finished at the request of Penny, who wanted one for himself and another, in pink finish, for Thompson. The latter, Thompson told Van Hosen, had been given to a drifter.

Finding specific information about the one she now owns, Van Hosen said, has proven to be a tremendous challenge.

“We found very few people who could verify the guitar was contoured at the factory,” she said. “Most of the people who saw the guitar were skeptics and thought it had been done later.”

But, with the help of Thompson’s son, Greg Penny, she contacted Thompson. “She remembered Hank giving us the guitar, and offered to send a sworn statement saying they were contoured at the factory,” said Van Hosen. Unfortunately, a fire at Thompson’s home destroyed most of her memorabilia, so she could find no pictures of Hank holding, playing, or even posing with the guitar. This, and the fact he owned it for a relatively brief period have conspired to reveal no photographic evidence.

“We searched bookstores and libraries, trying to find a picture or some information on Hank and the guitar,” said Van Hosen. And that’s when fate intervened.

While visiting her daughter’s family in mid 2000, Van Hosen paid a visit to a handful of bookstores.

“My daughter, Sheryl, and her husband, Mike, were planning a hiking trip and asked if I would stay with their children, my grandsons Nathan and Kyle. The live about 100 miles from my home, and while there I decided to check bookstores in the area for a book that might have some information. I stopped in one 20 miles away, in Laguna Beach. It was a humongous store – the music section was about half a block long. But I found Fender, The Sound Heard ’Round the World, by Richard Smith. I laid it on a chair with intentions of buying it, when a lady came over, also looking for a book. I offered to help, since I had been through most of them, and when I asked what she was looking for, she replied, ‘The Fender guitar book,’ as she spotted mine and said, ‘That’s the one.’ She asked if I had a guitar, and told her my story. She looked at me and said, ‘We knew Hank Penny.’

“I was floored. And then she said, ‘You should talk to my father, he was one of the owners in those days.’ She then told me her father was Don Randall.’”

“My jaw dropped! To think, ‘Here I am, 120 miles from home, in a bookstore, and we’re both there at the same time.’ Never in a million years!

“She gave me her phone number and we arranged to have my son call her to determine when her father would be available. When they finally spoke, Mr. Randall was very gracious, but had no information for us. But he did give us Richard Smith’s number. Unfortunately, Mr. Smith also had no information, and told us that he also had been unable locate a picture of Hank for his book. John surprised Richard when he told him, ‘You do have one – on page 140.’ Sure enough, the page includes a photo with a caption describing an unidentified man playing a Stratocaster at the Coconut Grove. ‘That’s Hank,’ John told him.”

The HP Telecaster has many features that point to it being custom-made.

1) While removing the neck reveals Fender guitar builder Tadeo Gomez’s ubiquitous initials, along with the “4-54” date in pencil on the end of the neck, things break from the norm starting on the pocket side of the neck, which hosts a stamped serial number (1002) that matches the number on the bridge and likely served to ensure the neck could be reunited with the body when the two were separated to apply the custom color. The pocket also has “HP” stamped in an italicized typeface. 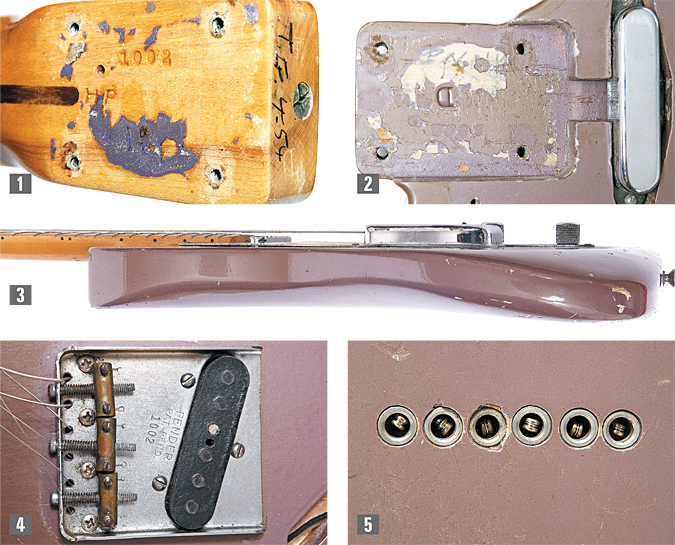 2) Further clues to the individuality of the instrument lie in the body’s neck pocket, where, thanks to a small section of exposed wood, the majority of the word “PENNY” is visible, along with traces of other writing.

The neck pocket also has a “D” stamp, which historical references indicate was used on very early Teles made until sometime in 1951 (also note the slot running from the neck pocket to the first pickup cavity). The custom angle is reinforced by the lack of a date in the neck pocket; perhaps it was erased during the refinish/customization process, or the body was simply one that had been laying around the shop. Was it an experiment in body wood that was ultimately deemed unappealing, but being very lightweight, worked well with an opaque finish? The body wood is difficult to determine given that its grain is covered, but its weight would point to it being ash, with basswood as an outside possibility.

The color is reminiscent of Fender’s Burgundy Mist, but without the metallic – and with a darker brown tint, but still leaning toward purple – a mild degree of fade is evident in the areas normally covered by the pickguard.

3) The most noteworthy difference between this and other Teles is its body contouring, while other details are more common.

4) The bridge is standard for the era, with three brass string-pair saddles.

5) Otherwise, some of the holes for its tuning machines are drilled slightly off-axis, and the location of the string ferrules on the back of the body is a bit erratic.

This article originally appeared in VG July 2007 issue. All copyrights are by the author and Vintage Guitar magazine. Unauthorized replication or use is strictly prohibited.