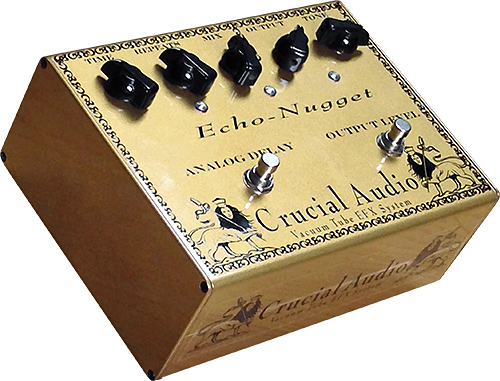 It’s hard not to be impressed by the physical presence of the Crucial Audio Echo-Nugget. Unlike typical small-footprint stompboxes, the Echo-Nugget is a beast, measuring approximately 6″ x 8″ x 3″ and weighing a few pounds. Before it’s even plugged in, its heft, solid build, and layout earn points. But the ace up its sleeve is Crucial Audio’s combination of a real tube preamp and analog delay.

Technical specs on this mighty box include a pair of 12AX7 preamp tubes and a bucket-brigade analog circuit providing up to 500 milliseconds of delay. There are Time, Repeats, and Mix controls for the delay section, and footswitchable Output and Tone controls for the preamp. The box also has high- and low-impedance inputs for regular passive magnetic and active pickups, respectively.

Plugged in and on the job, the Echo-Nugget is pretty exciting, thanks especially to that old-school vibe – real analog circuits and tubes hard at work in an era of instant digital delay. The delay controls are easy to manipulate. Time lets the user dial in the degree of delay while Repeats sets the fade time. Mix allows the user to set the level of the echo effect – from wet-and-sloppy to just a smidge of delay in the distance. Unlike digital delays with LED readouts, there’s nothing on the Echo-Nugget to tell the player exactly what millisecond they’re on, aside from a pulsating yellow light that blinks in rhythm with the corresponding delay time. Turn the knob down, and the light blinks faster in time with the shorter time between echoes. Turn it up and the echoes are farther apart, hence a slower-blinking light. The circuit sounds great and provides everything from rockabilly slap-back and standard rock delay to Albert Lee-style “cascade” echo. The Tone knob can be used to sweeten the effect as desired.

On the tube side, the 12AX7s add a fine boost and “sauce thickener” to the proceedings. In fact, turn the echo side off, and the right half of the Echo-Nugget functions as a stand-alone tube preamp. How cool is that? The only caveat is that the box has a large footprint on a pedalboard. It’s not cheap, either. But no question, you get what you pay for.

The Crucial Audio Echo-Nugget is a hip piece of guitar gear that not only looks old-school with its gold anodized finish and chickenhead knobs, but conjures vintage tones with ease. All told, this is a great pedal for guitarists who value tone and build quality above all else – a serious box for serious tone merchants.

Have Guitar Will Travel – 049 Dave Miner