This month, we take a guided tour of the pedalboard belonging to Craig Bartock, guitarist with Heart.

Craig Bartock, a well-known (and busy) guitarist/composer, has been the touring lead guitarist for Heart since 2004. Those who’ve seen him play live know that his tone is amazing; he relies on two Vox AC30 amps, several classic guitars, and this nicely loaded pedalboard. Here’s his breakdown:

1. Line 6 DM4 Distortion Effects Modeler
The distortion I use comes primarily from the amps, I tend to use this to shape the overall sound for various solos and rhythm parts. For example, if I’m looking more for a ’60s fuzzbox sound, I’ll accentuate Vox distortion with this to “remodel” the sound going in. In essence, I use this pedal to vary the tonality of the guitar, which changes the way the amps react. It’s a useful tool, considering Heart’s legacy and the various styles of solos.

2. MXR M169 Carbon Copy Analog Delay
I use this to simulate reverb/filler rather than an actual delay. It’s on very softly during certain solos with a long delay time and just a bit of feedback. When we play in rooms that tend to be drier-sounding, I use it to fill the gaps between notes. The delay has a dull, echoey sort of sound that doesn’t get in the way of the initial notes, which I like and is great for “gluing” the sound together, especially in venues where the sound tends not to be as roomy.

3. MXR M104 Distortion+
This has been my go-to distortion for many years. I use it with a lot of Heart songs, including “Magic Man.” A Distortion+ with a Strat and an AC30 on about 7 is an unbeatable combination. I use my guitars’ Volume controls quite a bit to regulate the amount of distortion. I’m constantly adjusting it to find that right amount of sound depending on the part and what type of tone Nancy Wilson has dialed in. The Distortion+ adds this level of brightness and bite that I love and can’t get just from the amp alone, especially with a Strat. When the Volume knob on the guitar is about at a 1/3 and this pedal is on, it has that Hendrix “Manic Depression” sound I really love– serious attack, as well.

4. Red MXR M102 Dyna Comp
This is perfect for rock solos in ballads, where sustain is everything. It’s especially useful for solos in songs like “What About Love.” It’s great for studio work, as well. Years ago, I used only a direct box and this pedal, and got amazing results.

5. Line 6 DL4 Delay Pedal
The most functional delay on the market. I have three distinct sounds programmed into mine. The button on the left triggers a basic delay that’s around 150 milliseconds, with some feedback. I programmed this to work around the MXR Carbon Comp; delay times and return sounds are totally different, so they can be on at the same time and not fight each other. It’s great for solos where a long delay can accentuate the riffs. The second button triggers a very short, slap delay with no feedback – almost like a doubling effect. I’d guess it’s around 30 ms. I use it for songs like “Straight On” (which has a bit of a delay on the original guitar part) and a McCartney cover we did called “Let Me Roll It.” It fattens the overall sound. The third button is set for a crazy-heavy long delay with a lot of feedback and modulation. I use it in conjunction with volume swells. The setting is perfect for “Mistral Wind,” where the guitar has a cello-like sound in the softer parts. The last button sets the time of the delays. I can adjust accordingly for changes in tempo, etc.

6. MXR M152 Micro Flanger
Ann Wilson wanted to cover the Robin Trower song “Day Of The Eagle,” and I needed a flanger, quickly! This was Nancy’s, and her tech, Jeffo Ousley (an excellent tech and all-around good guy), was nice enough to pass it over to me. It’s only used on that one particular song.

7. A.J. Peat Rooster Booster Pedal
As A.J. says, this pedal “…boosts your signal, adds bloom, and opens your tonal spectrum.” I totally agree. It allows me to fine-tune how hard I want to hit the amps with guitar signal. I can then find that perfect balance between how much gain to add on the front end and how much distortion I need on the back end.

8. A/B splitter
The signal from my guitar goes into this and then to an A/B box behind my amp, where my tech, Edward Mendoza, can switch cables and always have a guitar ready without having to unplug. This is important because there are some songs in the set that are spaced very close, and with this, we can work a guitar change in a few seconds.

I rarely leave a pedal on for an entire song. For example, one of the settings on the Line 6 distortion modeler comes on only during the second verse and guitar solo in “Kick It Out.” As a rule, the guitar and amps do most of the heavy lifting. The pedals are there to accentuate the styles Heart has been known for over the years, and make up for sonic differences in venues. 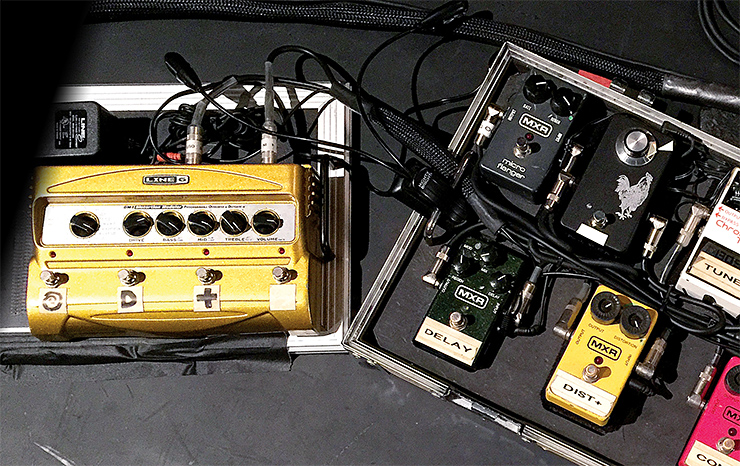 This article is from VG Signal Chain issue #13. All copyrights are by Vintage Guitar magazine. Unauthorized replication or use is strictly prohibited.