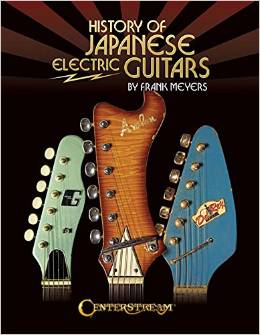 Frank Meyers’ first axe was a ’63 Fujigen EJ2 – a cheap-o, two-pickup solidbody like so many Japanese electrics used by beginner guitarists the world over. Though unremarkable, it spurred in him a love of the instrument that inspired this book.

Meyers spent 15 years researching Fujigen and other Japanese electrics of the 1940s, ’50s, and ’60s. Given the breadth of the subject – and the mindblowing confusion inherent in sorting it all out – Meyer’s volume represents a labor of love and a Herculean effort all in one. And he deserves a standing ovation.

Prior to this, the guitar buffs’ best source was the 1993 Japanese book entitled 60s Bizarre Guitars. If you read Japanese, had a lot of spare cash to spend to buy a copy – and if you could even get your hands on one – it was essential. But Meyers’ book is designed for the American market, and you need it.

Like Tom Wheeler’s pioneering American Guitars, this is a survey course. But that’s not to put it down. In fact, what can you expect when the first chapter, on Fujigen, includes 41 brand names under which the company sold its wares?

The book is a slim 176 pages, but it’s chock full of hundreds of photos, catalog images, record covers, and promo shots of forgotten bands with impossibly cool guitars. Meyers researched in both the United States and Japan, interviewing many company founders and designers – as well as understandably obsessive collectors. There’s even a handy chapter with ID info on 130 different pickup types.

The book serves as a ticket into a 10-in-one guitar freak show. Even if you’re not an owner or fan of these guitars, the breadth of design is astonishing and dizzying, often blending space-age styling with Japanese mod gone mad. The headstock shapes alone are awe-inspiring, at times even shocking – what were they thinking?

No, this is not the final word on Japanese guitars. Meyers knows that; he even includes guitars he can’t identify. And that’s part of the beauty and wonder of this book.