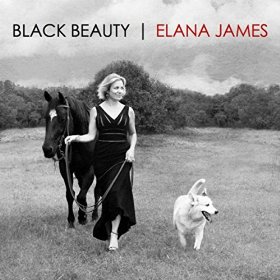 For her second solo effort, Elana James, fiddler-vocalist for the western-swing trio Hot Club of Cowtown, ventures afield into other genres. This shouldn’t be surprising, given her 2006 touring work as part of Bob Dylan’s band.

Along with original tunes, James covers material by Dylan, the Grateful Dead, country pioneer Goebel Reeves, and Meri Wilson.
The talented Dave Biller handles much of the guitar work. He’s prominent on the Dead’s “Ripple” (as is Cindy Cashdollar on steel), Reeves’ “Hobo’s Lullaby,” and the jazzy 1942 ballad “All I Need Is You,” which Peggy Lee recorded with Benny Goodman’s orchestra.

Among her originals are the western-swing instrumental “Eva’s Dance” with Erik Hokkanen’s fluid rhythm and solo guitar. Cashdollar contributes pungent Weissenborn licks to “High Upon The Mountain” and Dobro to “Waltz Of The Animals.”
James’ Dylan cover is obvious: “I’ll Be Your Baby Tonight,” from Nashville Skyline, featuring Biller’s guitar and Cashdollar’s steel.

James added music to a letter from an Army sergeant killed in Iraq in 2007 to create “Hey Beautiful: Last Letter From Iraq,” backed by Hot Club of Cowtown guitarist Whit Smith.

For anyone assuming James was locked into western swing alone, her engaging eclecticism here paints a colorful picture.