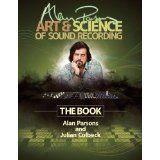 For the recording enthusiast, Alan Parsons talking about recording techniques is cherry stuff. Parsons of course was the assistant engineer on The Beatles’ Let It Be and Abbey Road, and the engineer on Pink Floyd’s The Dark Side Of The Moon. That’s just the tip of the iceberg, as Parsons had multiplatinum success with the Alan Parsons Project and became a top-tier producer.

As a “reappraisal” of his award-winning video series, Parsons’ book goes into greater depth and detail in sharing his wisdom regarding sound recording. It’s packed with chapter after chapter of diagrams, photos, and in-depth discussions about mic placement, recording software, monitoring, recording MIDI, dealing with disasters, and much more.

It’s an insightful, easy read, and the chapters are laid out in a logical fashion. It makes a great coffee-table book or a recording companion, and would be of interest to the casual novice, advanced recording aficionado, or curious music fan. It contains a plethora of technical information, amusing anecdotes, and the kind of user-friendly insight and flow that will keep you coming back for more.