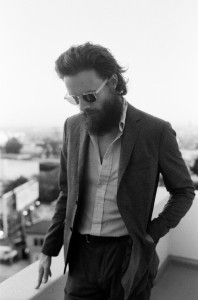 In 2012, Josh Tillman, former drummer of the much-lauded Fleet Foxes, released his first album as Father John Misty. Presenting tales of Laurel Canyon excess, narcissism, and self-loathing, Fear Fun was itself a highly pleasing indulgence, in part because it was often difficult to discern the degree to which it was all a carefully crafted character exercise.

This year, Tillman ups the ante with a new offering, billed as a concept album of love songs to his wife, Emma. This time, however, it’s clear these tales are far from a lark but, in fact, acutely autobiographical.

Tillman continues the FJM tradition of sometimes blunt but always brilliant narrative tales brimming with misanthropy and misadventure. Indeed, it’s quickly apparent that the 11 tracks on Honeybear are not typical love songs. If great offbeat songwriters like Randy Newman and Van Dyke Parks (apt comparisons) came across as weird uncles, Tillman is your talented nephew who is fun to brag about, but whom you probably don’t want to show up for the holidays.

Witness song titles like “Bored In The U.S.A.” (with canned and awkwardly cued laugh track), “The Night Josh Tillman Came to Our Apartment” (not a pleasant visit, it’s worth noting), and “Nothing Good Ever Happens At The Goddamn Thirsty Crow” (an acoustic strummer that builds into something entirely more).

Which is where this sophmore effort is truly a rewarding listener experience and a remarkable artistic statement, following, as it does, a stellar debut. Co-produced with singer-songwriter Jonathan Wilson, Honeybear is crammed with lush, layered arrangements and dabbles in hooky rock (“The Ideal Husband”), soul (“When You’re Smiling And Astride Me”), country (“Thirsty Crow”), and much more. Strings, keys, and occasional horns abound, complementing Tillman’s wonderful reverb-y vocals. 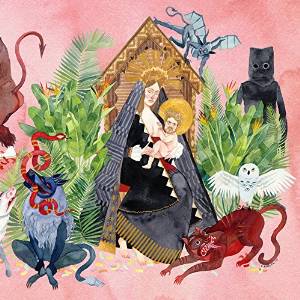 The only oddball is “True Affection,” a synth-pop dance exercise which, amid all of the album’s piled plush, is as conspicuous as a Sunday morning cigarette burn on a virginal white shag rug.

Lyrically, Tillman’s uncanny talent is to make dense songwriting sound effortless, like short stories set to music. Happily, the wordplay is alive and well on Honeybear. “She says ‘Like, literally’ music is the air she breathes/And the malaprops make we wanna f***in’ scream/I wonder if she even knows what that word means,” Tillman sings on “Apartment.” Or “She blackens pages like a Russian romantic/And gets down more often than a blowup doll” (“Thirsty Crow”) and “Emma eats bread and butter/Like a queen would have ostrich and cobra wine” (“Chateau Lobby 4 [In C For Two Virgins]”).

With I Love You, Honeybear, Josh Tillman offers previous fans and the uninitiated a headphone album full of lyrically and musically rich baroque folk.