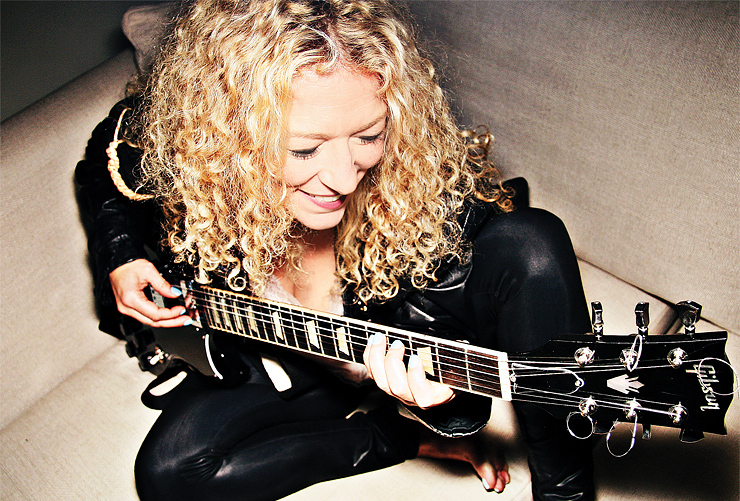 Nashville Pussy is fronted by the husband-and-wife team of Blaine Cartwright and Ruyter Suys. Its new album, Up The Dosage, is the band’s first in five years, and it’s jammed with Ted Nugent and AC/DC influences juxtaposed with redneck/trailer-park satire.

Your previous album was five years ago. Why such a long break?
Between Blaine and myself, we’ve been a part of four albums since then – one a year – with different bands. Blaine plays in two other bands; one is called Nine Pound Hammer, which is the band he was playing in when I first met him. They had a reunion tour and played in Europe. The lead singer bailed, so Blaine had to reinvent the band on the spot. He started fronting Nine Pound Hammer, and created a new band called the Kentucky Bridge Burners. He wrote and recorded an entire album called Hail Jesus, which is a gospel record. He and I recorded that and I played on probably 80 percent of it. I played mandolin, keyboards, guitar, and I sing.

While Blaine was on tour with that band, I joined a metal band called Dick Delicious And The Tasty Testicles. We put out an album and toured. Then Blaine and I have another project called Buzzard, which is Southern rock. In the interim, we’ve been honing our chops.

Was there a plan for the new record?
We have the same plan as any other band – make the greatest album in the world, and then take over (laughs)! There was something to be said for waiting. We were all pretty pent up, and as a result, the pre-production, the writing, and the recording went so fast and easy. It was effortless. Everything just came instantly. It was the easiest recording we’ve ever done. Everything just fell into place and we didn’t fight anything. We wrote everything just for this project. I think we wrote it in just eight days.
When we plug in for sound check is probably my favorite time. When it’s just me alone in a room with the loudest guitar on earth, I’ll come up with s**t on the spot. If I don’t record it, it’s gone. I record it and sometimes forget about it for two or three years. Then we go riff farming and find the diamonds that are in there. Turns out we had a bunch of great s**t. That’s the lightening bolt you see on the album cover. Everything just came to us like, bam! It came really fast, like a flash.

You have some great guitar tones.
Rick Beato (the band’s engineer) and I had a two-minute conversation. He said, “What do you want?” I said, “I’m a guitar player. What do you think I want?” He said, “You want to be loud?” I said, “Yeah! Don’t make me tell you to turn up my guitar (laughs)! I want my guitar solos to come in like a f***ing Learjet.” He managed to do something we couldn’t.

Are you still rockin’ the SG?
Oh, hell yeah. I’m tied to that thing. I got a 2013 SG Standard, and that’s my best guitar. It sounds so f***ing good. Unlike my last guitar, I have not pulled all the pickups out of it. I usually pull out the neck pickup and just play with the bridge pickup. All my wiring is hard-wired, so all I have is a Volume knob with the tone on 10.
A couple of my guitars in Europe have EMG pickups and they sound good with particular Marshalls. I have a Marshall SLP reissue and it sounds really good with my stock pickups on the Standard. Some of my older Marshalls need brightening up, so they sound better with the guitars that have EMG pickups. I go back and forth depending on the way the Marshalls are acting that night. They can be finicky.

How do you and Blaine divvy up the guitar duties?
Easy – I play all the leads (laughs)! This last tour, I was feeling a lot of Malcolm Young going on in me. Blaine and I are two sides of a train; one is going this way, the other is going that way. Somehow, we manage to make this thing propel forward. He plays with a down stroke/Ramones-meets-Johnny-Cash rhythm style. I’m more Jimi Hendrix meets ZZ Top. I can’t play what he plays and he can’t play what I play. When we play at the same time, it works.