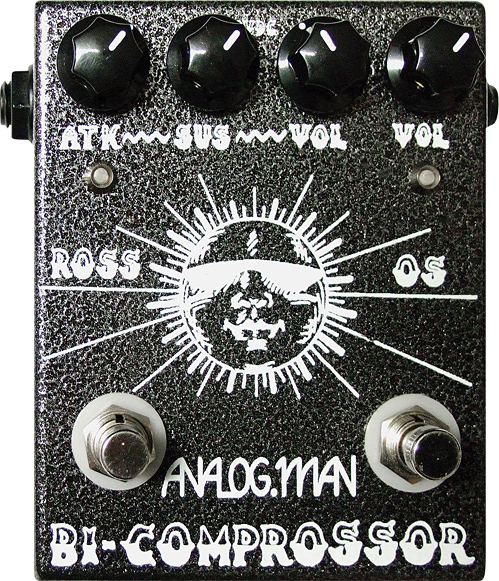 Mike Piera, a.k.a. Analog Man, is known for creating pedals with a vintage flavor. Clients include guitarists who want to achieve that classic “tight” or “squashed” guitar signal associated with players like Lowell George and Mark Knopfler, as well as a multitude of country pickers.

For guitarists who must have more than one compressor option, Piera created the Bi-Comprossor, which improves upon and combines the best qualities of the Ross Compressor and the Dan Armstrong Orange Squeezer. Each can be used separately or together via dual 3PDT stomp switches.

Actuated by the left footswitch, the Ross side is similar to an MXR Dyna Comp but with better sustain. It features new-old-stock (NOS) 2SC1849 Matsushita transistors of the type used in the original Ross Compressor and Dyna Comp, yet is cleaner-sounding and has more sustain (though it lacks the Squeezer’s earthiness). The right footswitch (the “OS” side) uses NOS 2N5437 transistors, 1N100 diodes, and a JRC4558 chip for increased smoothness. It compresses the attack of each note with a natural-sounding decay increase and yields the compressed signature grit heard on Steely Dan and Dire Straits records.

With its eyecatching graphics, the Bi-Comprossor is a true-bypass pedal that takes a 9-volt DC adapter or battery. Its Attack knob (identical to the original Ross pedal setting) allows the player to adjust the balance between squashed and percussive, while the Sustain knob adjusts the amount of compression and sustain. Higher settings increase volume and compress the signal, and have the same parameters as the original Ross and Dyna Comp. The left Volume knob is for the Ross mode, and the right Volume is for the OS. The Bi-Comprossor also has a red LED for the Ross and a yellow for OS.

The Bi-Comprossor was tested in conjunction with a Telecaster, a superstrat, and a selection of combo amplifiers. Beginning with the knobs set to 12 o’clock, the Ross side provided a volume increase and severe cut of the low and high frequencies – perfect for tight chicken pickin’, Rickenbacker jangle, and punchy sounds that pop from the mix.

The OS side is more intense and chokes off the peaks of low frequencies. The difference in how the two sides handle low end is very discernible; the OS is concentrated, thick, and exaggerated, while the Ross side is more subtle. Used together, the two functions can create some wickedly tight but smooth tonal variations for any number of live playing or recording situations.

The Analog Man Bi-Comprossor does a great job of dialing in a plethora of clean boost, subtle compression, or maximum strength squish. If you want transparency, look elsewhere. If you want improved tonal quality in a sturdy little package, look no further.