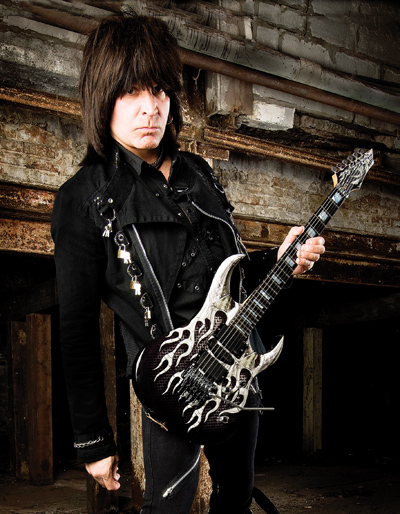 Michael Angelo Batio is one of the most prodigious guitarists on Earth. Since his stint with the rock band Holland in the ’80s, Batio has written his ticket with a combination of freakish talent and hard work. His current album, Intermezzo, is a note-intensive prog-metal rollercoaster that includes some similarly gifted guests like George Lynch, Craig Goldy, Guthrie Govan, Michael Romeo, and Chris Poland.

VintageGuitar: What did you want to accomplish with Intermezzo?

I wanted to make the writing and production as good as I could, sound like me, but not a rehash the same old riffs. I’m known for string-skipping, alternate picking, and sweep arpeggios, but there are only a few places where that occurs. I wanted to stretch every boundary with the way I write and sound.

When I started guitar, I studied jazz – I didn’t even like metal. I listened to Steely Dan, Earth Wind & Fire, and Al DiMeola – music with more chord progressions and melodic movement. It just happened in the ’80s I had this technique where I could play fast, and the harmonic-minor scale was easy because I studied jazz. I can play outside and play the changes, and I’ve kept my technique up for a long time. I work hard to be a better guitarist every year.

How do you handle being pigeonholed as a one-dimensional ’80s speed demon?

I prove them wrong by doing a record like this (laughs)! The only way to prove people wrong is to believe in you. And the only answer is the music. I do the best I can, and let people talk. I can’t control them.

Why so many guests on the record?

Music is like a football team. It takes everybody to make the play work. We have Chris Poland, a great young guitarist named Dave Reffet, a very cool up-and-coming guitarist named Annie Grunwald, Guthrie Govan, and Michael Romeo. My idea was to get some of the best established guys and some “new” people. I wanted to raise the bar, and everybody delivered. It was amazing. When I heard the solos, I thought, “This is insane!” I had Rusty Cooley and Jeff Loomis, but I thought, “George Lynch would be really cool.” Dave Reffet said, “I know George really well.” George said he would love to do it. It was a big collaboration, but Dave really helped brainstorm. My prerequisite was that I had to be a fan of what they did.

Which guitar are you playing most?

I endorse Dean Guitars and I have a bunch of signature models, but my number one is my new seven-string. I will always be a six-string player, but I really like the seven-string.

I’m scheduled to play 125 shows around the planet – guitar clinics, a Tribute To Rock Guitar multimedia show, and solo shows. It’s pretty crazed and I never take it for granted. I’m very grateful.