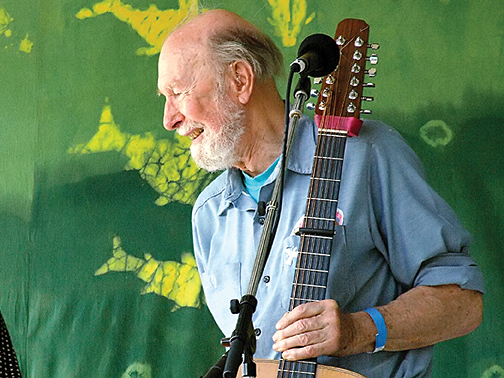 Renowned folk singer/songwriter, musicologist, organizer, and political activist Pete Seeger died January 27 at a hospital in New York City. He was 94 and passed from natural causes.

Seeger was born in 1919 to Charles Seeger, Jr. and his wife, Constance. Charles Seeger is credited with helping found the academic discipline of ethnomusicology in his work for the University of California. Constance was a concert violinist who also taught at the Julliard School. After his parents divorced in the mid 1920s, Charles married Ruth Crawford, a music student and composer who later contributed to Carl Sandburg’s influential folk-music anthology, The American Songbag.

Pete Seeger began playing the ukulele as a schoolboy, and at 17 discovered the five-string banjo when the family, while researching rural American folk music, attended  the Mountain Dance and Folk Festival in North Carolina. Enthralled, Pete asked his father to arrange for him to learn basic strokes on a five-string banjo from festival organizer Bascom Lamaar Lunsford. He then spent the next several years focused on learning the instrument.

After finishing prep school, Seeger attended Harvard, studying to be journalist. There, he started a political newspaper and joined the Young Communist League. He left college after two years and moved to New York City, where he helped Alan Lomax catalog and transcribe music at the Archive of American Folk Song at the Library of Congress.

Seeger’s life was always immersed in folk music and the socioeconomic realities of those who created it. As a result, he became a political figurehead who performed songs for the grass-roots audiences at labor rallies, anti-war rallies, civil rights marches, colleges, and folk festivals. He typically played banjo or guitar during these performances, and was known for adapting spirituals and other traditional songs and encouraging the audiences to sing along with him.

In 1942, he was drafted to the U.S. Army and trained as an airplane mechanic, but then assigned to a unit of performers in the Pacific Theater. After the war, he resumed performing and in ’49 helped form The Weavers, a folk group that also included Lee Hays, Ronnie Gilbert, and Fred Hellerman. By the early ’50s, the band had sold some four million singles and albums, but Seeger’s membership in the Communist Party (which he had disavowed prior to forming the band) came back to haunt him when a pamphlet was published listing performers with known Communist ties. It essentially blacklisted the group, which then broke up. Seeger was subsequently called to testify before the U.S. House of Representatives and, after refusing to answer questions about his political beliefs, was charged with contempt, indicted, and sentenced to a year in prison. The indictment, however, was overturned.

His discography ultimately included more than 100 albums and several hit songs, mostly via his time with The Weavers.  The ’60s saw a new generation of performers find inspiration in Seeger’s life and work. Among them were Bob Dylan, Don McLean, and others involved in the “folk boom,” including the Byrds, who in ’65 scored a major hit with “Turn, Turn, Turn,” which was written by Seeger.

Seeger remained very active, professionally and politically, throughout his career. A co-founder of the Newport Folk Festival, he was integral to the folk-music revival of the ’60s. By the mid ’60s, he began to call attention to environmental issues, which he championed through the remainder of his life. In 1996, he was inducted to the Rock and Roll Hall of Fame. In ’97, he won a Grammy Award for best traditional folk album. He won the award again in 2009, and then in 2011 won in the children’s music category. Vega and Martin have both issued instruments that carry his name; Vega the Pete Seeger Longneck banjo, Martin the JSO and J12SO! Sing Out Pete Seeger model guitars.

“Seeger was one of the most influential and iconic performers in the history of American traditional and folk music,” said VG contributor George Gruhn. “He combined music with political and social activism influencing millions of people. He helped to promote the careers of numerous musicians including Woody Guthrie and Leadbelly. During the late 1950s through the mid ’60s, Pete was one of the major catalysts for the increased popularity of five-string banjos and 12-string guitars in folk and popular music. His legacy is vastly greater than the sum of his recorded music.”

Seeger is survived by a son, two daughters, a half-sister, and six grandchildren.