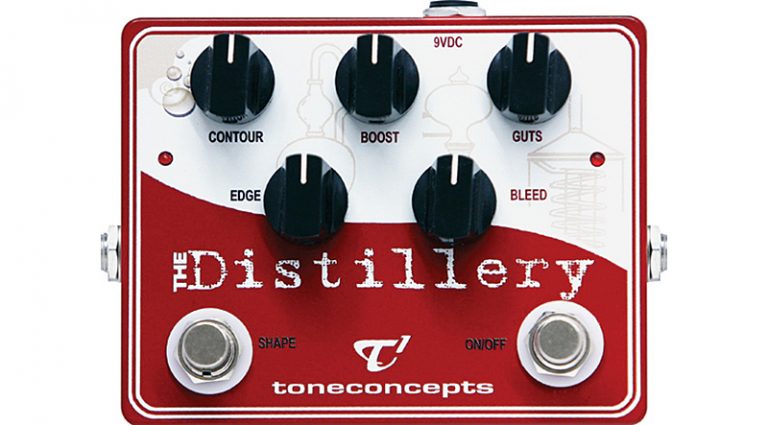 While many pedal makers tinker away on effects that exhibit their personal tonal philosophies, the fact is that most don’t play gigs or compose music. Seraphim Marcopoulous of ToneConcepts was keen enough to take advantage of his professional relationships with some of the finest guitarists in the industry, asking, “What’s missing?” 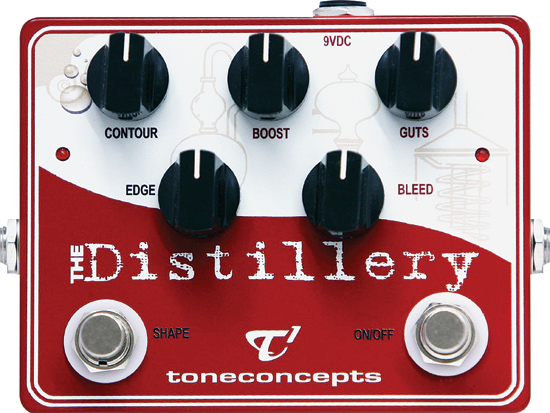 After collaborating with the likes of Billy F Gibbons, Buddy Guy, Kenny Wayne Shepherd, Alex Skolnick, and Jim Campilongo, Marcopoulous discovered what was missing: They wanted a tone-shaping boost pedal that enhanced the sound of their rig, kept their core tone intact, and improved the sound of subpar backlines. Named by Wilco guitarist Nels Cline, The Distillery was created for guitarists with an ear for nuance who want to preserve the character of their guitar’s sound.

The Distillery’s workmanship is solid and its graphics strikingly cool. A true-bypass pedal, it features two circuits, each activated by a footswitch. The right footswitch is the On/Off button for a boost circuit featuring three controls: The Boost knob gives 20 dBs of added volume and edgy grit; the Guts knob is an extra gain stage to add more punch and sustain; and the Bleed knob is a passive tone shaper that can tame highs or add edge. These features would be more than enough for the guitarist seeking to add more pizzazz to their amp, but we’ve only begun.

Engaging the Shape footswitch on the left opens up a big can of tone-shaping delights. The Contour knob adjusts high frequencies when turned clockwise, and also works as a filter, while the Edge knob adds sparkle and upper-mids. These two knobs work together to fatten up thin single-coils or to achieve more clarity with bassier neck-position humbuckers. Unfortunately, while the Boost can be engaged without engaging Shape, Shape can’t be used without Boost.

Used with a variety of combo amps, high-gain heads, and guitars, The Distillery is like an energizing cold snap. The Boost section alone offers transparent amp-pumping options with lots of variations from light volume goosing to full-blown organic breakup. It’s perfect for the anti-pedal player who prefers to exploit the tonal purity of an old combo amp. Engaging the Shape side and adjusting the Contour and Edge knobs did not produce one bad sound, but rather provided everything from comfy mids to crispy chime. It also added lively zing to fuzz and distortion.

Not recommended for the attention-challenged, The Distillery is nonetheless a superb pedal for the experienced guitarist who understands the idiosyncrasies of EQ, boost, and their respective effects on making beautiful music.