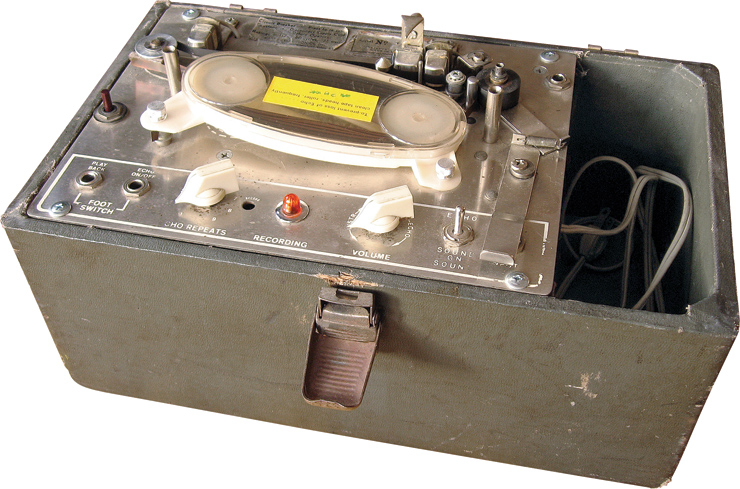 Sam Phillips didn’t invent tape echo with his mid-’50s recordings of Elvis, but he just as well may have. So influential, so inspirational were those songs – with their warm, glorious slap-back echo created in Sun’s control room by two jerryrigged tape recorders – that budding rock-and-rollers everywhere had to have it.

With the arrival of the Echoplex, circa 1959, tape echo finally became easily accessible, and if you wanted to rock like Elvis, it was just the spin of dial and a tape loop away. And that doesn’t begin to describe the sonic adventures Led Zeppelin or Pink Floyd would take the Echoplex on. Its sounds are still being experimented with today, some 30 years after the assembly lines rolled to a halt with the last solidstate version.

True, there were many others playing with tape echo years (even decades) before the Echoplex. Les Paul, of course, was trying everything, but his recordings featuring his homebrewed delay were not as influential on rock. Ray Butts crafted his landmark EccoSonic amp in 1953 with built-in echo – first via wire, then tape. The Ecco-Fonic effect followed circa ’59 with a spinning tape head. But neither offered the flexibility of an adjustable playback head to fine-tune the spacing of the echo. Ditto the English Binson Echorec, which used magnetic recording discs. And the Italian-made Meazzi/Vox Echomatic was hard to come by – plus notoriously temperamental.

That adjustable playback head was the key to success for the Echoplex. It was also one of the hardest technical elements to get right during the long gestation of the machine.

The Echoplex story starts with Akron, Ohio, guitarist Don Dixon, who began building his own tape echo effect in the mid ’50s, as he told VG’s John Teagle. Dixon wasn’t an engineer and couldn’t get the machine right, so he answered a newspaper ad for electrical repairs and met Mike Battle, also in Akron. Battle could fix or build anything electrical, and spent the next years perfecting Dixon’s creation.

“It was three or four years before we really got it down where we wanted it,” Dixon told Teagle. “I’d say, ‘Put this back, take this out, a little more of this, a little less.’ And he said, ‘You’re just too damn particular!’ And I said, ‘Mike, if you don’t want to make the best one on the market, lets just quit.’ And he’d get mad, but, boy, he’d go in there and just do wonders with it.”

The key was that adjustable playback head. Battle added, “A lot of the early machines… you couldn’t move the heads, you just played to fit that speed. I don’t know much about music, but how could you play all them songs to the same tempo?” He added a playback head that slid, allowing infinite adjustment to the echo spacing – within the machine’s physical dimensions, that is.

Battle also enclosed the tape within a cartridge, which protected it and helped retain its sound quality. The cartridge’s patent-applied-for “endless loop magazine,” as early brochures hailed it, offered some two minute’s worth of tape.

The duo also labored to get the tone just right, directed by Dixon with Battle again shaking his head over the constant revisions. “I worked on that for him for two years. He said, ‘It ain’t just quite right, Mike.’ I was getting kind of disgusted with it.”

Battle’s brother, John, was a die maker, and he built the early cases and other metal parts in his basement. They first offered Echoplexes for sale in about 1959.

“Surprised me,” said Battle, a confirmed non-musician. “These guys would come in, play it, and buy it! I’d build another. I thought these guys buying this piece of junk should have their heads examined, but they had a circus with it!”

Soon, Dixon and the Battle brothers couldn’t keep up with demand. Battle showed the Echoplex to Chet Atkins, who tried and failed to interest Gretsch. Dixon and Battle connected with Market Electronics, a Cleveland company that produced Echoplexes and sold the first 500 to the Maestro division of Chicago Musical Instrument Company in 1959. Production was later taken over by Harris-Teller of Chicago.

The first Echoplexes were retroactively known as the EP-1. Our Echoplex here is a late-’60s EP-2, which added a combined instrument/echo volume-blend oscillator to its control panel alongside the Echo Repeats knob. It also featured Sound-on-Sound recording, allowing infinite looping – at least for the tape’s two-minute length.

With the rise of solidstate technology, Maestro instructed Battle to get rid of the tubes and update the machine. The solidstate EP-3 arrived in the late ’60s, about the time Maestro was taken over by Norlin Industries, then the parent of Gibson, which would sell the effect. The EP-3 was followed by the EP-4.

“Everyone was going to solidstate… so I developed the EP-3. It was the best solidstate Echo unit on the market,” Battle said. Despite his early frustration with Dixon over tone, Battle had become enamored with tube sound. “I did not like [the solidstate] direction, so I left the company.”

But Battle’s creation lives on. With a ’52 Gibson ES-5 into a Fender Vibro-King, the EP-2’s slapback almost makes you think you’re in Sun Studios; its tubes create a warm, rich sound – in fact, some guitarists such as the Police’s Andy Summers switch off the delay and use the Echoplex just to thicken their tone. By adjusting the echo volume, you can put the emphasis on the guitar’s original signal, or the echo. Adding more repeats and spacing out the echoes creates an otherworldly vibe.

These days, analog and digital delay pedals are much less expensive, much more hardy, and easily replaceable. But the Echoplex – with that funky ’50s electromechanical technology and tube-driven tone – has become the standard by which everything else is measured.