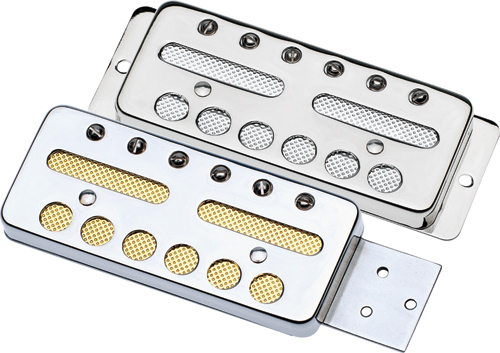 Gold-foil pickups are exotic beasts – just like many of the 1960s Japanese-made Teisco guitars that sport up to four of them crammed between neck and bridge. These pickups may look like the grille of a ’59 Eldorado, but Teisco aficionados will tell anyone that original gold foils are not nearly as reliable as an old Cadillac, reflecting an era when “Made in Japan” were code words for inconsistency. Jason Lollar has rectified this problem with a reproduction Teisco-style gold-foil pickup that sports all of the Godzilla flash of the Asian originals infused with the magic and skill of one of the most renowned boutique pickup makers in America. And the tone? Vintage Ry Cooder or David Lindley, with a healthy dose of Hound Dog Taylor.

Gold-foil pickups are so named for the piece of foil (typically stamped in a grid pattern) installed between the coil bobbin and metal cover. But not all vintage gold foils were made equal. The two most well-known variants, the Teisco-style units used by Ry Cooder (in his modified Stratocaster, aptly named “Coodercaster”) and the DeArmond “double moustache” foils found on some Harmony guitars of the ’60s, have noticeably different tones. The Teisco-style pickups (which Lollar modeled) tend to be brighter and more sought-after than the DeArmonds, though one is in danger of entering cork-sniffing territory with such comparisons. These thin pickups have a lot going on inside with no room for error – not something your average weekend winder can take on. Jason Lollar has gone through great pains to chase the dragon into his foils.

Lollar’s gold foils are available as single pickups and as matched sets of neck-bridge and three-position. An H-S-H-routed Stratocaster was “Cooderized” with a neck-bridge pair that was then run through a variety of amps. The first word that came to mind was “glassy,” as in Waterford crystal – transparent but with attitude. Played through a blackface Deluxe Reverb and an AC30, the upper mids and highs rang with clarity, colored by the warmth of complex harmonic overtones. It simply cried for a bottleneck slide. Especially notable was the neck-position pickup, which delivered amazing Cooder-ish tones. Both conjured a pleasantly surprising amount of bite and grit through a Tweed Deluxe. Gold foils are certainly not the first choice for death metal (the market has many lower-priced options), but it would be a mistake to conclude that they are one-trick ponies, incapable of delivering tasty, crunchy riffs or sweep-picked staccato blitz.

The bridge pickup carried more treble, without any hint of the ice-pick characteristic of some single-coils (yes, these are single-coils), but just a bit more in the way of output would have been nice (the bridge came in at 7.24k-ohm, the neck at 6.78k). The pickups played very well together and were nicely balanced at full volume. And unlike many other single-coils and humbuckers, the Lollar gold foils did not devolve into mud when the tone pots were dialed down. Even with most of the treble rolled off, both the neck and bridge pickups continued to deliver ear-worthy sounds.

The coil of a Lollar gold foil is wound around a rubberized ferrite bar magnet with 44-gauge wire and has two holes for riveting to the metal base. The base plate is flat with no protruding pole pieces or magnets. The result is an amazingly low profile (0.375″ tall overall) that will fit a lot instruments where nothing else will work. The test gold foils were mounted with the ears of the mount beneath a recut Strat pickguard, but it became apparent that a humbucker-sized route wasn’t necessary. Lollar Gold Foil pickups should fit well without additional routing in any guitar where the pickups are mounted in the pickguard. They are a great retrofit option for players chasing a new tone, and builders should take note that they would be really interesting on retro-style guitar designs. In addition to offering the option of nickel, chrome, and gold covers in the standard mount, Lollar also has a flush-mount option that should work well on archtop jazz boxes.