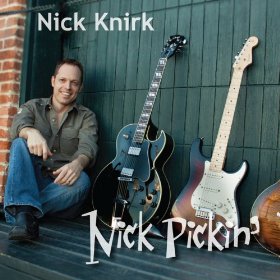 As soon as this Louisiana native finished high school, he relocated to Denton, Texas, near Dallas, where he got a degree in Jazz Studies from the University of North Texas.

His CD opens with an impressive instrumental arrangement of “And Your Bird Can Sing” that could almost be mistaken for the Beatles’ backing track. The repertoire is entirely instrumental (ranging from covers of Dusty Springfield to Stevie Wonder to Elvin Bishop – mostly utilizing a modeling Fender VG Stratocaster), save the original jump blues “What Do You Want With Me,” sung by Corry Pertile with a Leslie-fied solo by Knirk.

Another original, “Gallup ’n Gatton,” lives up to its estimable title, and across 11 tunes Knirk (pronounced “kuhnirk”) strikes a deft balance of chops and restraint. He still lives in the D/FW area, where he has his own trio and gives private guitar lessons.

Greg Douglass and the Accomplices