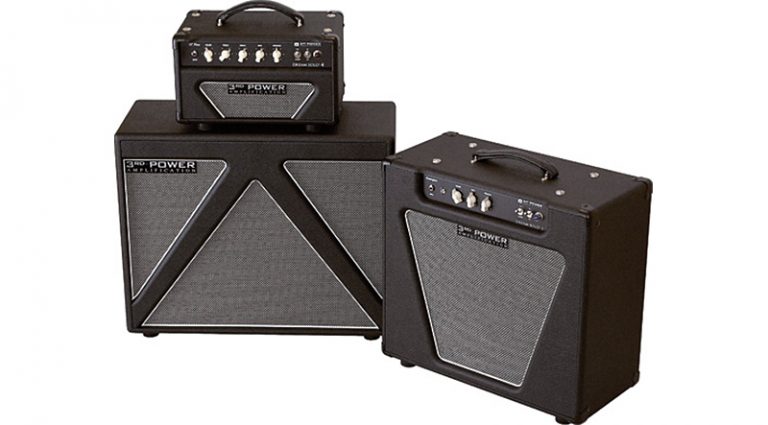 Recording/touring guitarist, studio engineer, and industry veteran Jamie Scott made the metamorphosis into amp designer by learning to repair and modify Marshall heads. He quickly realized that he wanted amps to sound full, responsive, and what he refers to as “fader up” – i.e., fully formed and ready to “fader up” on a recording console or a live sound board.

Scott’s vision became reality with the debut of his 3rd Power HD100, which received instant market acceptance thanks to notable users like Simon Townshend, Richie Sambora, Neal Schon, and Steve Miller. Requests for more vintage-styled amps followed, and Scott responded with the American and British Dream series, mining the tones of vintage classics. The former features channels called Brownface and Blackface, while the British Dream offers ’59 AC and’68 Plexi.

Dream amps instantly found homes among artists and producers alike, with studio guys like Justin Niebank and Paul Ebersold, and guitar legends like Joe Walsh and Vince Gill counting themselves among Dream users. Two years later, Scott responded to customer demand for single-channel entries in the Dream series by introducing four Dream Solo amplifiers, including the Dream Solo 1 and 4 (DS1 and DS4), based on the aforementioned Brownface and’68 Plexi channels, respectively.

Both the DS1 and DS4 have a power section comprising two JJ 6V6s and a silicon diode rectifier. The preamps differ in the DS1’s two 12AX7s versus the DS4’s three 12AX7 preamp tubes. The DS1 has Volume, Tone, and Presence controls, as well as a Bright switch, while the DS4 has Treble, Middle, Bass, and Presence controls. Both amps have a rear-mounted HybridMaster control knob, along with 4/8/16-ohm speaker outputs, as well as a passive effects loop. Both are neatly wired in point-to-point fashion and utilize vacuum tubes that are burned in for stability and sonically tested and graded for optimal performance. The DS1 tested was a combo (also available as a head) while the DS4 was a head (also available as a combo). Both the DS1 and the 3rd Power Switchback 112 cab through which the DS4 head was played utilize the Eminence Legend V128 12″ 100-watt speaker that Scott breaks in to give his amps better responsiveness and tone right out of the box.

After plugging a1967 Telecaster into the DS1 and beginning the ceremonial twisting of the knobs, it became immediately apparent that this nod to the original is spot on. The DS1 has the pronounced midrange and woody thwack that say “brownface.” As good as the clean is, the dirtier tones are even more satisfying, with their percussive, juicy, and aggressive flavors. As much as the gear illuminati might say the tweed Twin is the sound of Keith Richards, the DS1 displays Keef tones in spades.

A ’59 reissue Les Paul and a Strat also performed well; the Les Paul, by nature of its higher output, turned the amp into a rocker lower on the Volume dial. While the DS1 has a single Tone control, just like the venerable original, the addition of Presence and Bright controls allow one to dial in the tone to the sweet spot and then add shimmer and clarity as needed with the additional controls. Additionally, the HybridMaster feature makes even the dirtiest tones available at low volumes.

The DS1 seems to always have a nicely “framed” tone regardless of setting, confirming Scott’s “fader up” philosophy of amps. When pressed on this, Scott indicates that his amps have proprietary TubeMIX circuitry (similar to a summing bus on a recording console) that applies subtle noise reduction, limiting compression, and some gain to EQ correction. How it all works is unclear; what is clear is that the tones of both amps are very pleasing. Finally on the DS1, both the speaker and the cab are noteworthy. Scott uses proprietary deflection panels inside his cabs to help reduce standing waves and disperse sound. To some ears it gives the amp more of 3D sound than a standard open-back cab.

The DS4 is the bestseller of the Dream Solo series, and after plugging into one, it’s clear why. At lower volume settings the amp is very sweet and, frankly, Fender-y in nature. However, as the volume is raised, the amp’s plexi pedigree quickly becomes obvious. Gritty, full, and punchy tones emanate, and thanks again to the HybridMaster control, the amp is capable of great crunch tones even at low volume. And unlike most master volume controls, Scott’s approach does not suck the life out of the amp’s tone – it simply allows the player to set a desired sound then the overall level. A peek inside the chassis reveals a brilliantly simple combination of circuits that regulate not just signal level, but voltage and current flow in various stages.

The DS4’s familiar three-band EQ is quite useful for dialing in the best tone for the instrument. Each dial exhibits nice variation from 0 to 10, but never so drastic as to make the amp picky as to position – or make the player afraid to breathe on it once the sweet spot is found. The Switchback cab with its 12″ Eminence V128 perfectly handles clean and dirty tones. And its ability to switch from open- to closed-back configuration gives it more tonal variation and versatility. Overall, it is a great amp with stellar cleans and dirt tones that are much richer and more responsive than any stompbox.

The 3rd Power Dream Solo amps are fantastic tools and they arrive ready to be played. Scott’s passion for tone, attention to detail, and experience as a player have resulted in a desire to build amps that not only sound like the amps of yesteryear, but are dialed in to work well in modern band and gigging contexts, thus features like the HybridMaster volume control, the Switchback cab, and the TubeMIX feature that subtly compresses tone to give Dream amps their signature “fader up” quality. These features add up to vintage hues sculpted to please the most finicky soundman, producer, or tone aficionado.